Death was a common occurrence for Victorians. Plagues, childbirth, wars—even a simple cut before the advent of antibiotics could bring the Grim Reaper to your door. But the Victorians had one thing their predecessors did not—money. The growing middle class could afford the lavish trappings of death that became the mode. Gail Z. Martin, Ruti Turner, Leanna Renee Hieber, and Beth Dolger discussed some of the ornate rituals, clothing, and jewelry of that time period during the virtual panel “Victorian Death Customs” on Friday at 7PM. 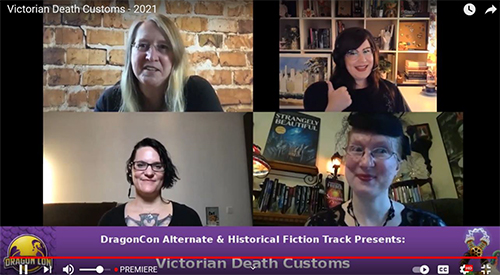 Victorians, Martin said, “raised death and dying to a high art.” The Industrial Revolution had led to a sharp increase in urbanization, Turner noted, and people no longer spent their entire lives on the family farm. They not only had more money but also more time in which to spend it. Throw in access to magazines and a desire to keep up with the Joneses, and death became an intricate ritual filled with fancy trappings to display the depth of their grief, not to mention the wealth of the nouveau riche.

Widows were expected to dress completely in black for an entire year. After the year of full mourning, she could add some gray, purple, or other somber, muted colors to her wardrobe, but she still wore some black, perhaps a collar or gloves or an apron. Hieber showed viewers parts of the mourning costume she was wearing and other items that would have been worn at the time, such as a lace collar, gloves beaded with jet, and several pins, some of carved jet and others of gutta-percha resin, which was cheaper than jet.

Dolger showed viewers a German jet pin carved with wheat that symbolized the soul harvested at death. Daisies were another symbol often used by the Victorians because they were resilient and beautiful, like the soul.  Mourning, Dolger said, was a pastime for the wealthy, for only they could sit around and do nothing but feel their grief. Poor folk still had to work. In fact, a poor woman might only have one dress, so to show her grief, she’d have to dye it black.

Victorians hung crepe, covered mirrors to keep the dead person’s spirit from being trapped in them, and always took the corpse out of the door feet first. They even put a bell in the coffin just in case a person was accidentally buried alive. Or a knife. Or even a gun. With the advent of photography, they took pictures of the dead to remember them, sometimes posed on a bench with the entire family. (The deceased person will be the clearest in the image, since it took a couple minutes to expose the film and dead people are quite good at holding themselves perfectly still.)

Since urban people could no longer bury their dead on their own land or in the village churchyard, Turner described how cities began to set aside land for garden cemeteries, one of which is the Oakland Cemetery in Atlanta. She urged everyone to visit it. While we may think some of these expressions of mourning are morbid, the Victorians were intimately acquainted with death, and they had their queen as an example to follow. Victoria always wore black after Albert’s death and mourned him for the remaining 40 years of her life.