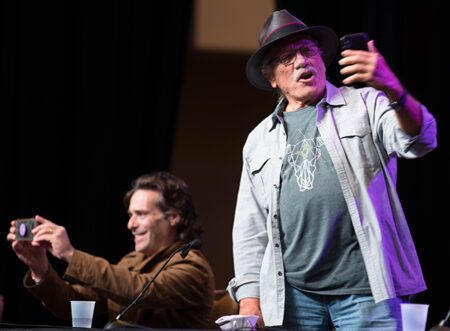 After the noise of the enthusiastic welcome subsided, the moderator asked the cast members how they felt about being back together at a con. All the actors said they were happy to be back with fans and with each other. Trucco said he’d been concerned the con platform might never come back and was glad to see the convention happen. Olmos admitted he had initially been worried but felt good about coming because of the protocols. He thanked everyone for coming and “a thousand times over for not punching anyone because you have to wear a mask.” Helfer seconded his sentiments, noting that it was up to everyone to stay safe.

The moderator described Dragon Con as a “con of many fandoms” and asked the panelists to share their favorite nerdoms as fans. Callis said he’d always liked science fiction but wasn’t into it as much before Battlestar Galactica. There are a number of shows he likes, but he’s nervous about knowing what goes on behind the scenes. He likes to view the shows as they are.

Olmos stated, to loud cheers, that he had been binging on Stargate SG-1 and had reached season five. He added that he started with the Kurt Russell film because he felt that was essential. Although Stargate was filming in Vancouver when Battlestar Galactica was, he had never seen it. He also had not seen the original Battlestar because he was in a play when it was running and wasn’t free the evening the show aired. Because he had never seen the Battlestar version he was in, he binged that too since he had a year with plenty of time.

He described his best TV experience as having been “with this group,” adding that it had been far better than he could’ve imagined and including 18 years of friendship. One castmate he hadn’t seen was Michael Hogan, who played Saul Tighe. Hogan has been in the hospital and Olmos asked fans to check out the GoFundMe.

Other cast members also binged series they hadn’t seen. Helfer mentioned For All Mankind, which got an enthusiastic reaction from her castmates and the audience, and Ted Lasso. Penikett said he was waiting for the new season of Mr. Robot. The creator of that show may do a new Battlestar Galactica, which Penikett described as “bittersweet for me.” He added, “I don’t know that the show needs to be touched.” Trucco went darker with A Handmaid’s Tale, which he described as not only brilliantly filmed but prescient and scary.

Discussing role preparation, Olmos said he locked onto his age, being old and ready to retire and take it easy, a description his colleagues disputed. Penikett reported being impressed with Olmos’s discussion of the Adama-Apollo (Adama’s son Lee, played by Jamie Bamber) conflict arc with Ron Moore after the first table reading.

An audience member asked Olmos about his time on Agents of S.H.I.E.L.D. Olmos felt he should’ve been a longer-running nemesis for Clark Gregg’s character, Agent Coulson.

A veteran in the audience asked the actors how they captured the “psyche of the show,” the stresses of combat and survivorship. Callis replied that the energy on the show came from everyone. He cited Olmos going around the Galactica set and pointing out things that looked too new or just not right. Though the cast were acting, their characters were in life or death situations. The performances combined the writing and an understanding of the seriousness of the show. He cited an episode in which he told Grace Park’s Sharon Valerii,  shortly before she was to commit suicide, “There are worse things than death in this life.”

The actors also responded to a question about head canon or backstory they had for their characters that never explicitly appeared in the show. Penikett said he and Park often created fill-in information for what had happened to their characters since they had last been on screen. As a young actor, he found that empowering and a way to make the work easier. He has used the technique several times since.

Helfer said she had very little backstory when they shot the miniseries. She was described in the series bible only as “the machine as woman,” and had to fill that out herself. In the scene where she snaps a baby’s neck, she insisted on playing it in a way that was less harsh. Penikett noted that not making that change would have led to a different arc for her character.

The cast also discussed Katee Sackhoff’s return to the show as Starbuck after her character’s lengthy absence. She was shooting Bionic Woman on the same lot, and seeing her in a non-Battlestar costume felt odd to the cast. She wasn’t allowed to tell them she was returning, and there was no social media to blow the secret. When she came back to Battlestar Galactica, the cast didn’t know where her character had been or how she returned, and even the writers didn’t know. That made the return awkward for the characters, and it stayed that way.

Another question shifted the topic to the revelation of which characters were the final five Cylons. Trucco found out his character was one from Aaron Douglas, who sneaked a look at the script. He found the development hard to reconcile with his character’s vigorous participation in the resistance. Michael Hogan, he said, was furious, which worked well for Hogan’s character, Saul Tighe. Callis added that he would’ve liked to see an episode about each of the final five before they wrapped up.

At the end of the panel, Olmos filmed a shout-out from the cast and audience to send to Michael Hogan. He then led the audience in the traditional Battlestar Galactica panel sign-off, a three-peat of “So Say We All” to conclude the event.