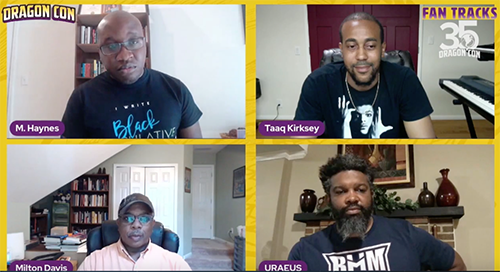 The High Fantasy track sponsored a virtual panel, “Charles Saunders: The Founder of Sword and Soul,” on Friday at 1PM via the Fan Tracks streaming channel. The panel consisted of Milton Davis, Taaq Kirksey, Uraeus, and moderator Marcus Haynes.

The panel opened with a discussion of Saunders as a writer. Kirksey described sword and soul as going beyond the limits of the Conan dominate and win at all costs story. Those stories don’t show readers what the victory cost the person battling, and Saunders examined that. Kirksey described him as a “vast contained universe” in one person. Saunders pulled from history including civil rights, Vietnam, and the modern era and put those in his work. He opened a wider window for Black speculative fiction to look at Black heroism that was yet to be realized.

Uraeus described Saunders’ work as a combination of Tolkien, Robert E. Howard, black history and just a dash of black exploitation. Kirksey said sword and soul is like sword and sorcery, with heroic deeds, magic, and swordplay but is more mature and complex and is based on the culture of Africa. Saunders’ characters, like those in Game of Thrones, are more real and flawed than is standard in sword and sorcery. They lose and then succeed often at high personal cost, as in life.

Uraeus described Saunders’ work as speaking to Black culture, history, and ancestry. Davis said Saunders coined the term sword and soul and mentioned it when Davis first met him. He added that Saunders’ approach started with Conan but addressed the shortcomings in the treatment of African culture. The great civilizations of Africa are incorporated and handled with respect. Readers can enjoy the stories without knowing that culture, but those who are familiar with it find the stories richer. While many authors stay close to Howard’s Conan, Saunders evolved. He took his hero, Imaro, in a new direction by the fifth book of the series, a direction that came to define sword and soul as a genre.

When Uraeus discovered Saunders’ books, they had been reissued by a small press. The third book ended on a cliffhanger, and the publisher didn’t issue the later books. Uraeus wanted to read the fourth book but couldn’t locate it. When he finally made contact with Saunders, he learned the publisher was not issuing any more books in the series. Uraeus tried to find another publisher but couldn’t. Even though he worked for a publisher, he was not one. Nevertheless, he offered to publish Saunders’ next books. He published six novels over the course of fifteen years and developed a friendship as well as a working relationship with Saunders.

While Uraeus and Saunders worked together, Uraeus introduced him to Milton Davis, who worked with him on short story anthologies and other projects. The anthologies were designed to give other writers opportunities to work in this genre. Davis also wrote sword and soul novels.

Kirksey was a college junior when he discovered Saunders’ first book, Imaro, in 2002. He loved it. He wanted more, wanted to see Black people having the kinds of adventures found in The Lord of the Rings. When he saw the cover image for the second book, Quest for Cush, he loved it so much that he longed to read the book. After graduation, he decided to track Saunders down and try to bring this material to the big screen. Kirksey figured actors or producers with big names had already secured the rights but set out to try anyway. He told his girlfriend that if she helped him track down Saunders, he would marry her. The next day, she had a contact who could help.

Not expecting much, Kirksey told Saunders how much he loved his work, and Saunders agreed that he could try to produce a movie. While working on that, he attended graduate school and secured and internship and then a job in the film industry. He and Saunders emailed back and forth, and he and Davis burned through a number of expensive international phone cards because Saunders lived in Canada. During that time, Saunders put more warmth, depth, and eloquence into emails than many people do into conversations. Kirksey had to go back into journalism in 2008, so he told Saunders not to wait for him if someone wanted to produce the work. Over the years, some people tried, but nothing worked out.

In 2016, Kirksey tried one more time. Black Panther had been released, “with all the bells and whistles,” leading him to believe the floodgates would open. And they did. In 2018, he secured a production deal with money and a contract for Saunders, a source of satisfaction to the writer. Unfortunately, Saunders’s health failed, and he passed away in 2020.

The panelists then turned to discussion of Saunders’ legacy. Uraeus said he felt great joy at publishing Saunders’s work. He obtained Saunders love for the books, ones done in a style that’s now associated with those covers as Frank Frazetta’s work was with Robert E. Howard’s. People who’ve read Saunders’ books find that the works open up a different doorway inside their imaginations they didn’t know was there. Kirksey said he still wants to see the books on the big screen but wants to be sure the quality is there and productions are as true to Saunders’ vision as possible. He said it was a heavy burden because it’s the author’s legacy, but it’s a burden Kirksey wouldn’t relinquish for anything.

Davis noted that Saunders was in contact with many other authors, nurturing them to move forward. The anthologies Griots and Griots: Sisters of the Spear gave opportunities for new authors to publish African fantasy. He added that Saunders’ books were unadulterated, not changed to conform to a particular audience. Davis wants to continue publishing new authors in sword and soul, keep it relevant, and let people know where it came from.