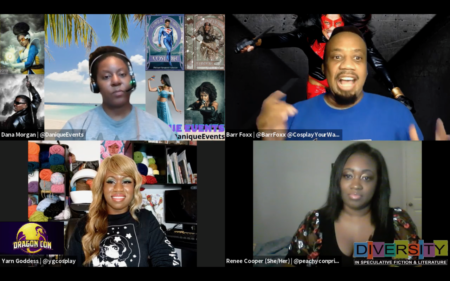 On Saturday at 2:30PM, the Diversity Track presented a panel entitled “Evolution of the World Through Fashion, Music, and Culture.” Moderator Dana Morgan and panelists Barr Foxx, Renee Cooper, and Yarn Goddess, discussed the evolution of cultural trends and the social tendency not to credit those who start them.

Morgan started the panel by asking the participants to discuss the ways fashion adopts cultural influences of Chinese, Native American, Black, and other marginalized communities. Foxx said he found some developments, such as the ability to wear braids or natural hairstyles to work without being considered unprofessional. If someone’s doing the work, does their appearance affect it?

Yarn Goddess also liked the wider acceptance and diminished questioning of various fashionable looks. She cautioned against unwittingly supporting cultural appropriation, recommending that buyers find out who is behind the scenes of the marketed fashion. If the style isn’t being sold by someone from the culture that originated it, that’s appropriation. The seller might use it now but will drop it later.

Cooper also pointed out the need to do the research. She considers appreciation doing the research, knowing where the look starts, and giving recognition there on an ongoing basis. As an example of appreciation that might first appear not to be, she mentioned a person wearing a kimono. Is that person wearing it correctly and perhaps studying the Japanese culture? The same principles, she feels, hold true for influences of Black culture. Allies, she says, pay respect to the styles.

Yarn Goddess reminded the panel that braids and cornrows became popular after Bo Derek wore them. At the same time, Black people were not supposed to do so. Foxx pointed out that originators get lost as more and more people emulate a style.

The panel discussed the backlash over the singer Adele wearing her hair in Bantu knot with a Jamaican-flag top. While she might have done the research, paying respect and increasing visibility, that cultural connection will be lost as people who don’t do the research copy the look simply because Adele wore it. Many people didn’t even realize the style was Bantu.

Foxx pointed out that artists are often unaware they’re appropriating something. They come in for a publicity shoot or an interview and wear the clothes provided. Sometimes that’s a new look designed to help them connect with an audience, and they don’t always ask where that look originated. When he worked on the Juneteenth project, he thought he had found the first black female NASCAR driver because the woman he met believed herself to have been first. Later research, however, showed that she was not. He noted that correcting misperceptions becomes more difficult with cultural trends because there aren’t records such as NASCAR’s to fall back on.

The panel discussed the creation of door knobs, light bulbs, air conditioning, and certain alarm systems by Black people, some of them women and all of them uncredited. Foxx noted that Black people were doing the work and created what they needed to make the work better, mostly without recognition though there is an impressive number of Black patent holders.

Yarn Goddess suggested that small, indie creators would benefit from instruction on how to copyright their work but most don’t think of the legality of what they’re doing. Cooper also noted that the Electronic Frontiers Forum at Dragon Con offers a number of panels on law and activism. Morgan said the class needs to be presented in laymen’s terms, that presenters who know all the technicalities sometimes forget their audience doesn’t.

Cooper added that keeping records makes origination easier to prove. People can take photos on their phones as they go through the process of making something. Then they have records with a time stamp. Agreeing, Yarn Goddess noted that it’s easy for creators to take what they’ve done direct to social media without documenting what they’ve done to make it. Once something is on the internet, the panel agreed, it’s gone.

The panel also discussed the impact of fast fashion, trendy clothes that are mass-produced and offered at a reduced cost. This works against the indie creator or small shop, though Cooper pointed out that some companies collaborate with and credit smaller creators. Big companies could get the people they steal from to work for them and could pay several indie creators for what they pay one big name.

Foxx pointed out issues with sizing. Tall and plus-size customers often pay more than average-sized customers. Costs have come down, but it’s easier for big companies to produce clothes in standard sizes. The panel agreed that it’s worth spending some extra now and again, when one can, to support a small company or indie designer. Social media and online stores help gain recognition for smaller companies and can help them avoid the cost of a physical store, though the panelists agreed on the need to know who’s behind the brand.

Foxx said he likes to wear indie creators’ clothes to special events so that he can give them credit when other guests ask what he’s wearing. Despite appreciating the convenience of big retailers, which is necessary at times, the panel agreed that it’s up to everyone to support indie creators in their work.