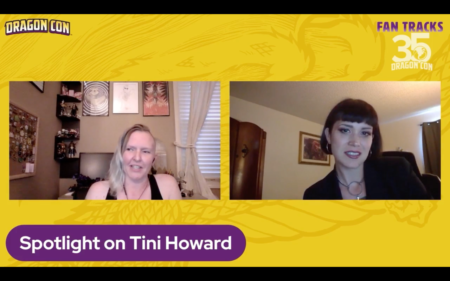 Winstead began by asking Howard about her journey to becoming a comics writer. Howard said she had always been a voracious reader but was particularly drawn to comics, especially newspaper comics, and enjoyed collected editions of strips like Calvin & Hobbes and The Far Side. She didn’t read superhero comics because they seemed impenetrable and the comics shops near her were not “teenage-girl friendly.” Manga, on the other hand, was, so she read a lot of that. Although she read Watchmen, she still didn’t read superhero books, which she saw as four colors and tights. “What we think about a genre is often different from what it is,” she noted. Her then-boyfriend, however, suggested early Grant Morrison work, which she loved.

One of the first books that led her to think she could write was Matt Fraction and Salvador Larocca’s Invincible Iron Man. The character’s self-doubt, lack of the suit, and inability to drink because he was in recovery appealed to her.

Howard said she had always written stories, often including fan fiction. When she broke into comics, she was working as a freelancer writing for corporations. Knowing she didn’t want to do that forever, she thought about writing comics. She loves their serial nature, the one-chapter-per-month structure, and the real-time reactions from readers.

Despite liking to plan and having lead time, if she had six-month lead time, there would be very little visible preparation for about three and one-half months. She generally knows what’s coming far enough ahead to write her way into it, but deadlines can be very short if there’s a sudden opening or a need for a fill-in because the regular story is delayed. In Howard’s view, spending more time on a work makes it better because it allows more time to take a critical look at it.

The first licensed work Howard did was on a Barbie comic book. She said she did the job with the idea from the corporate world that you take the job you can get and “do the heck out of it.” The job was to make people care, and she grew up loving Barbie.

In 2013, Howard won the Top Cow Talent Hunt with Magdalena, a story about a woman descended from Jesus Christ and Mary Magdalene. Top Cow then published Magdalena, which gave her an actual comic she could show to editors at cons as a credential. Howard entered because she was desperate to get a script she could show to people, and most people won’t read a book that hasn’t been made. Editors at conventions can’t read unmade work. Since she couldn’t afford to pay an artist to produce more than six pages, she chose to submit to anthologies and contests. This was her chance to get her scripts in front of people who might pay her for them. This produced many rejections, some saying no, and some saying “no, but change this,” which sometimes led her to tweak the work if she considered the suggestion valid. “Friends will read for you and tell you it’s good,” she said, “but good friends will read and tell you where it’s not good.”

Howard likes Magdalena because the series doesn’t “throw women over thirty into the woodchipper to make room for a spunky eighteen-year-old.” To her, women over twenty-five deserve to be heroes and are heroes, whether or not they’re likeable.

Winstead pointed out that Howard produced the creator-owned comic Assassinistas at Black Crown with editor Shelly Bond. After reading an essay in The Secret Love of Geek Girls, which is prose, not a comic, Bond reached out to work with Howard. Having long wanted to work with Bond, Howard described this as very lucky because Bond invested in her as both a creator and a friend. Part of being a really good editor, Howard explained, is figuring out what the writer means if it isn’t clear on the page.

In 2019, Howard agreed to work exclusively for Marvel. She had written a Captain America annual and had worked on Marvel Knights with Donny Cates, an opportunity she said was scary a lot of the time. Explaining, she described herself as not being a person “who always knocks the first take out of the park.” Howard credited editors who helped her figure out how to tell the stories right. She also worked on Age of Conan: Belit before becoming the writer on Excalibur.

She loved Excalibur from the beginning, indicating that she felt ready to trust her creative voice. X-Men writer Jonathan Hickman reached out to her early on. They were both looking at the ways the character of Apocalypse was changing in the rebooted X-Men books, so they coordinated their stories. They also collaborated on the leadup to X of Swords and wrote X of Swords together. Howard was also writing Excalibur, and many of the text pages in the backs of the books.

A longtime lover of cosplay, Howard said she hoped to see costumes from the Hellfire Gala show up at conventions, now that cons are resuming.

Winstead asked why Howard’s work on X-Corp featured the character Monet St. Croix, a telepath. Howard liked combining her with Warren Worthington, the X-Men’s Angel. She sees both characters as having good and bad capabilities, and Monet is a special favorite of hers, her “go-to telepath.” Monet has a different perspective as a woman of color and a mutant, a great character to put up against Warren Worthington. One of the original five X-Men, he hadn’t had a leadership turn. On top of that, his mutation makes him beautiful, and the beautiful are often discounted.

Howard said she was working on four projects she couldn’t disclose because they hadn’t been announced. She did say that a special guest was coming to Excalibur.

When Winstead asked Howard to recommend books everyone should read, she cited Understanding Comics by Scott McCloud, which explains what comics do and why, Dawn by Octavia Butler, which she said would “reprogram your thoughts on humanity,” and Grant Morrison’s Batman stories. Howard declined to add others, explaining that a reader’s relationship with a story is personal and she doesn’t want to get between a reader and a book. She and Winstead noted that every book (or song) is someone’s favorite.

In closing, Howard urged everyone to support their local comics retailers.