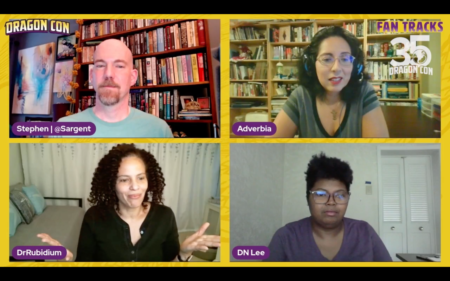 Laws of Physics? What Laws? On Saturday at 7PM, Science Track Director Stephen Granade hosted a discussion of the science of The Fast & The Furious on the Fan Tracks channel with the Curly Haired Mafia, who are otherwise known as Lali DeRosier, Dani Lee, and Raychelle Burks. The panel’s consensus was that the laws of physics don’t apply in the universe of these films. After briefly discussing the characters they liked best, they addressed the reasons various stunts in the films would be impossible in the actual world.

When Granade asked which characters the panelists identified with, DeRosier chose Letty because she’s a feisty Latina who isn’t in the films for sex appeal but is competent and has a bit of an edge. Lee chose Han because he’s beautiful, with cheekbones she wants, and makes being cool effortless. Burks, however, said she didn’t identify with anyone, that she would be the extra in the crowd frowning in disbelief at what was happening. She added that she wouldn’t fit with the characters because she doesn’t like Corona and “that’s a requirement.” Granade concluded the discussion by saying he would like to be Han, strolling through it all, but was probably more like Jesse, who messed up his race in the first movie.

Granade then turned the discussion to the stunts, asking what gives with people being slung around and Dom and Letty using a car as an airbag.

DeRosier said the first movie set the tone of the series when Brian O’Connor had an all-out fight with a thug in a fishnet tank top, the two of them pounding on each other for more than five minutes in real time on a concrete surface, only for both to “pop up without a mark from that” afterward.

Lee described the violence as cartoonish, as though “all the stunts are coordinated by Wile E. Coyote” and all the tools “from Acme.” Agreeing, DeRosier noted that the series starts as purely an action movie, but by the eighth film, an anvil could drop on Dom, and he would just shrug it off.

Burks noted that the movies became more and more science fiction. At one point, Dom and Letty throw themselves out of fast cars, collide, and survive. By the sixth film, she said, everyone should die from what they do. Lee added that when one person is falling off a bridge, another diving after to catch her is “not a good strategy.” Burks thinks the stunts are so “grand, passionate, and romantic” that it’s only later, when there’s time to stop and think, that viewers see how ridiculous they are. Each film pushes reality just enough to gradually establish all the characters as superheroes.

Lee pointed out that a car sliding under a semi isn’t really possible, and Burks added that friction, mass, and inertia are bent for the stories. As examples, she mentioned extreme turns made without sufficient braking, women’s hair never being mussed, and windshields never having bugs on them. Granade pointed out that if you can adjust friction, mass, and density, you can alter wind speed.

The panel then shifted to the use of nitrous oxide as an engine booster. Lee pointed out that the gas isn’t a fuel but a tool used by dentists to calm nervous patients. It’s a controlled substance and very difficult to obtain, yet the movie characters have an ample supply.

Burks added that it isn’t a fuel but does increase oxygen levels. The problem with increasing oxygen is that increased oxygen burns fuel faster, so it would be important to have the right ratio of the oxidant and the fuel. The racers would need an extra fuel tank. She pointed out that an oxidant is not a propellant that will boost a car over a ravine. For that, she said, “You need something like rocket fuel.”

DeRosier then reminded the group that the in-universe rules apply and the first film established nitrous oxide as a fuel. Various stunts would take viewers out of the films if they had time to think about them. All the cars’ air bags are disabled, and no one ever gets seat belt burn, nor do they even wear seat belts regularly. She noted that the characters are “in and out of the windows like Bo and Luke.” [editor’s note: Bo and Luke Duke are main characters from The Dukes of Hazard] Burks added that the characters’ cars are T-boned frequently, and although that’s the most deadly form of collision, they’re all still alive.

The discussion then turned to other forms of trauma. While Letty’s amnesia in the fourth film was assumed to have come from a crash, DeRosier pointed out that amnesia is a psychoadaptive way to suppress trauma and that a certain point all the series’ characters should all be traumatized. Burks added that they all grew up in foster care, had parents who died or were murdered or had absent parents in addition to suffering constant physical injuries.

Coming back to Letty’s amnesia, DeRosier pointed out that when Letty admitted her memory had returned, she said it had been back for a while. This means she was observing to see if she wanted to come back to the group, but the movie blew past that implication.

Granade commented that the movies generally skate by consequences. In one film, Brian O’Connor broke a fellow agent’s nose, and nothing happened to him because of that. Burks described the characters as “not great people,” at various levels of being bad. Concurring, Lee said one wouldn’t necessarily root for them in real life. Burks and DeRosier discussed street racing, which wasn’t treated a crime, and the boosting of DVD players in the first film. The characters gradually moved into international high finance crimes and terrorism.

Granade turned the discussion to a car parachuting out of a plane. In reality, the impact would be fatal to anyone in the car. DeRosier said that would require a big parachute, which would collapse forward so the car would be “pillowcased” under it. Granade described behind-the-scenes footage showing the intricate process of flaring the parachute and making sure the car landed flat. Burks noted that these films don’t use much CGI.

On the topic of racing, the panel discussed a race between a submarine and the protagonists’ cars in Fate of the Furious. Movies like Hunt for Red October and various World War II films notwithstanding, submarines move very slowly. They have to push through a lot of water.

The group also took issue with a bit in one of the films that had villains place a rat on a cop’s stomach, turn a metal bucket upside down over it, and heat the bucket with a blowtorch. The idea was to have the rat chew through the officer’s stomach. Lee wanted to know who was holding the bucket in place, and how, while it was being heated. She works with rats and wasn’t sure the rat would bite. Burks questioned the heat capacity of the inside of the bucket and the effect of the hot air, which she thought would kill the rat. DeRosier pointed out the psychological effect on viewers not familiar with rats, who likely would freak out.

Despite the scientific issues with the films, the panel agreed that the movies succeed because the action pulls in viewers and the characters work effectively as a team.