What does it take to defend the world against things that go bump in the night? And why would anyone choose to do so? Bestselling authors Patricia Briggs, Kevin Hearne, Faith Hunter, Kim Harrison, and Richard Kadrey joined moderator Carol Malcolm to answer those questions and more during the virtual panel “The Urban Fantasy Protagonist” on Thursday at 8PM on the Fan Track channel. 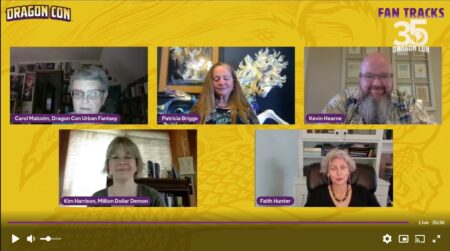 One of the traits their protagonists seem to have in common is a willingness to protect the people they love. Briggs’ Mercy Thompson is loyal and protective, but her greatest asset is being smart and taking advantage of situations. Hunter’s Jane Yellowrock is so bullheaded that she won’t stop, which is both a strength and a weakness because she’ll keep plowing ahead even when she’s on the wrong track. Harrison’s Rachel Morgan cares deeply about the found family she has built around her and will do whatever it takes to protect them. Hearne’s Atticus O’Sullivan is a survivor who knows how to adapt and disappear into each new culture as it comes along, but he’s also a protector of the Earth. Kadrey’s James Stark is out for revenge, ready to kill everyone and everything, and yet he, too, slowly begins to care for humans and will protect others.

A few extraordinary abilities help even the odds. Hunter’s Yellowrock is a Cherokee skin walker with the soul of a mountain lion. Hearn’s O’Sullivan is an ancient druid with a magical sword. Harrison’s Morgan is a shifter, and Kadrey’s Stark fought demons as a gladiator in Hell.

The authors agreed that they use real cities and modern settings for their protagonists because every piece of reality they add helps the reader believe more readily in the supernatural elements. They also like to use first person for its intimacy, which gives them an easy way to connect with readers, although Briggs thinks close third person can be just as intimate. Kadrey noted the importance of Stark’s dark humor, developed during the eleven years the character spent in Hell. “You can have any number of decapitations,” Kadrey quipped, “as long as they’re funny.”

These authors are working hard to keep their readers entertained. Briggs’s next Mercy Thompson book, Soul Taken, will be out in March 2022, and she’s signed a contract for two more. Hearne’s Paper and Blood came out last month. Hunter’s True Dead will be out September 14th and Junkyard Bargain in October, and she’s almost finished the first draft of her 15th Yellowrock book. Harrison’s Million Dollar Demon is out now. Kearne’s last Sandman Slim novel, King Bullet, came out in August.

But wait…something strange is happening. Kadrey has disappeared from the panel! Could there be a supernatural explanation for this glitch? Is it time to kick some demon butt? Urban fantasy protagonists unite!