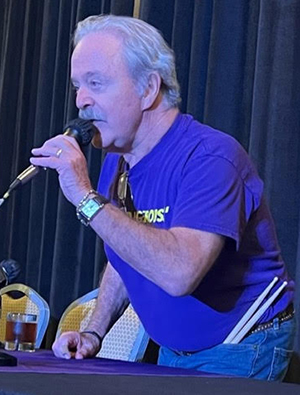 The Star Wars Track at Dragon Con welcomed voice actor Jim Cummings to the Hilton Grand East Sunday evening to lead fans on a journey into the world of voice acting and, in particular, that of Hondo Ohnaka, the space pirate who appeared in both Star Wars: The Clone Wars and Star Wars Rebels, two influential animated series. Cummings has voiced more than 400 characters during a thirty plus year career and much of that has been work for Disney. He is currently the voice of Winnie the Pooh and Tigger, voiced 127 episodes as DarkWing Duck, and has a credit list that goes on for pages. He credits being in the right place at the right time for his success. He happened to become a part of the Disney Channel’s talent pool when it began producing original content. Cummings appeared on Dumbo’s Circus as the voice of Lionel the Lion. From that point on it was “off to the races.”

Cummings saw the original Star Wars trilogy in a movie theater in New Orleans and never, in his wildest imagination, dreamed that one day he’d play a role in the franchise. “I’m the original cheeseburger in paradise” he proclaimed, for not only did he get to create the voice of Hondo for two animated series, but that of Disneyland’s Millenium Falcon ride as well.

When bringing a character to life, Cummings prefers to see a picture to get a sense of its voice. In the case of Hondo Ohnaka, seeing the character really helped him. A pirate, Cummings settled on a voice for Hondo that was part Charles Bronson and part Yul Brenner. He saw Hondo as a “cool guy” and wanted to temper the character a bit, moving him from simply a rogue to an “endearing rogue.”  The tool he used to accomplish that was humor.

He credits Dave Filoni for allowing the character development to be organic. He enjoys working with the other voice actors in the studio, so they can feed off one another. Not only did Filoni allow that, he often allowed the actors to read multiple pages of script in one take. This allowed the actors to really get the flow of the story and where they were headed. Cummings also pointed out that the writers came to understand that he would improvise dialogue to enrich the character. He promised to always give them one take “as written” with all others being fair game. It clearly worked.

Moderator Bryan Young asked about the audiobook Pirate’s Prince, a story told from Hondo’s perspective and read by Cummings as the pirate. There he did the work verbatim but was comfortable doing that. Not only was it a different format but as Cummings pointed out: “the writing was very solid.”

The session was a dynamic, entertaining, and insightful hour that absolutely flew by for all the members in the audience.