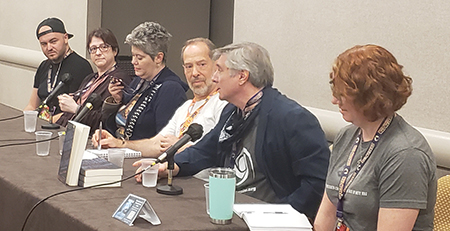 Writers Track moderator Vanessa Giunta quizzed a stellar panel of writers on Friday at the Hyatt, asking first how they wrote themselves out of corners. Andrew Oliver, appearing on a convention panel for the first time, approached the question by addressing what each character’s goal was and how they reached it. J.M. Paquette also took a character-centric approach, suggesting that the delinquent scene be rewritten from another point-of-view (“POV”), a demanding but rewarding approach.

Claudia Gray said to cut even exciting adventure that gets in the way of your story. She likened it to the story’s “junk DNA.”

David B. Coe/D. B. Jackson lamented having a dire, “oh f— me” moment about 60 to 62% through each book. He recalled facing the problem on a micro level, tracing character POV’s until he found a breakdown in what the character naturally did, thought, or wanted and rewrite.

Hank Schwaeble saw the cornered scene as not a problem, but representative of the challenge of writing. He recalled Truman Capote’s pithy remark about Jack Kerouac’s habit of writing straight through to the end without rewriting: “That’s not writing, that’s typing.” Noting the Necker cube optical illusion, he proposed that if the writer examines different character perspectives and looks at situations from different angles, eventually a light bulb goes off: “How did I not see that?” He recommended that authors don’t get discouraged, that this process is what writing is about.

Cecelia Dominic suggested that if you ever accidentally kill off a character—which she admitted to having done—that you should riff off it, even to the point of reviving the unfortunately deceased character for spin-offs.

The panelists next weighed the pros, cons and varieties of outlining techniques to avoid scene problems, as well as using synopses and back cover blurbs as guard rails, before taking questions from attending writers.