Desiree Jackson is no stranger to Dragon*Con and conventions in general. She's attended and worked in various capacities at different conventions for almost 15 years. Her devotion to fandom was sealed when introduced to fan fiction (by her mom) in high school. Although she mainly volunteers as a beta reader, Desiree has been known to write a story here and there. She's an avid science fiction fan and is excited to be working with the Daily Dragon this year.  She is thankful to be working with her talented and devoted (both to her and to scifi & the Daily Dragon) husband, Jason.

Colin Ferguson, Jamie Paglia, Niall Matter, Tembi Locke, and Debra Farentino took the stage Sunday for the “Eureka: What Would Carter Do?” panel in the Hyatt’s Centennial II-III ballrooms.  There was much joking and bantering between the panelists and it was evident to everyone watching that these are people are used to spending large amounts of time around each other… END_OF_DOCUMENT_TOKEN_TO_BE_REPLACED

The Brit Track hosted a fan-run panel on the ever popular BAFTA and Emmy award winning Top Gear Sunday at 11:30AM in the Macon room of the Sheraton.  The panel started off with a discussion of the latest series, or season as we phrase it in the States, which is number 18 for the Top Gear crew.  Emphasis is being… END_OF_DOCUMENT_TOKEN_TO_BE_REPLACED

A lot of us have no idea how to prepare for a special moment in front of the camera with a celebrity guest at Dragon*Con.  So, what does it take?  A massive amount of work, that’s what. Craig Damon, of Craig Damon: Photographer, arrived in Atlanta on Wednesday just to get the layout of his room and to check his… END_OF_DOCUMENT_TOKEN_TO_BE_REPLACED

Sherrilyn Kenyon’s first panel of Dragon*Con 2012 was “An Interview with Sherrilyn Kenyon” Friday 1PM in Regency VI-VII (Hyatt).  Among the many questions asked, significant attention was paid to the status of the movie adaptation of Kenyon’s popular Dark-Hunter universe.  Kenyon said that there was a draft of a script done but there were several characters were omitted. She knew… END_OF_DOCUMENT_TOKEN_TO_BE_REPLACED

For the first time since the start of the costuming track, I made it to the track room in M103-105 (M) for their 2PM panel, “Fabrics: Proper Choices and Embellishments.”  After some initial technical difficulties, the panel got underway with Freddie Clements showing some examples of garments that were at the base the same–and took the same amount of time… END_OF_DOCUMENT_TOKEN_TO_BE_REPLACED

Lexa Doig is no stranger to science fiction fans, first appearing in William Shatner’s Tek War as Cowgirl.  She has appeared in such shows as Andromeda, The 4400, Stargate SG-1, and most recently, she can be seen in V. Daily Dragon: So what have you been up to? Lexa Doig:  Uh conning, signing… DD: Other than keeping [husband Michael Shanks]… END_OF_DOCUMENT_TOKEN_TO_BE_REPLACED 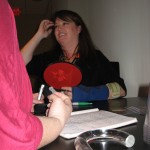 Sherrilyn Kenyon is still all smiles when she talks with her fans.  This year, Sherrilyn is Dragon*Con’s Literary Guest of Honor.  She took time out of her always busy schedule for a quick chat with this Daily Dragon reporter. Daily Dragon (DD): Where do you get such amazing ideas from? Sherrilyn Kenyon (SK):  I don’t know.  (laughs)  There’s a little… END_OF_DOCUMENT_TOKEN_TO_BE_REPLACED