Tempest Bradford is a science fiction and fantasy author by night and a technology journalist by day. When she's not geeking out over the latest phone, coolest tablet, or most useful laptop, she spends her time absorbing, analyzing, and writing about genre media. Oh, and writing fiction, too.

Her published stories and random thoughts can be found on her blog and website at KTempestBradford.com.

It’s been fifteen years since Farscape first debuted and subsequent TV space operas still have a hard time topping it. Gigi Edgley, who played Chiana, helped fans celebrate and relive the magic on three panels at Dragon Con this year. Before the last day wound down she sat with us for a short interview on the Walk of Fame. Daily… END_OF_DOCUMENT_TOKEN_TO_BE_REPLACED 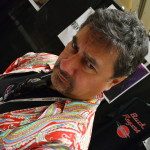 Lani Tupu is most recognizable to Farscape fans as the show’s first antagonist, Bialar Crais. He was also the voice of Pilot, one of the alien creatures created for the show by the Jim Henson Creature Shop. We were able to snag some time with him just before Dragon Con officially ended. Daily Dragon (DD): CGI or Puppets? Lani Tupu… END_OF_DOCUMENT_TOKEN_TO_BE_REPLACED

You might know Cleolinda Jones (@cleolinda on Twitter) from her epic Twilight recaps, Movies in 15 Minutes, or her involvement in Hannibal fandom. Ever since the NBC show premiered last year she’s not only recapped all of the episodes but also developed an eyeshadow line called This Is My Design with the folks behind fansite Tattle-Crime.com. She’s here repping Hannibal… END_OF_DOCUMENT_TOKEN_TO_BE_REPLACED

Actress Mary McDonnell has once again returned to Dragon Con after a few years away. While she may always be Battlestar Galactica’s President Laura Roslin to many fans, I’m really enjoying her work on TNT’s Major Crimes where she plays Captain Sharon Raydor. McDonnell always brings a quiet power to the roles she plays, often embodying women who are commanding… END_OF_DOCUMENT_TOKEN_TO_BE_REPLACED

This year Lucy Lawless made her first appearance at Dragon Con, taking part in Battlestar Galactica and Spartacus panels as well as her own solo panel on Friday afternoon. Her breakout role as Xena: Warrior Princess was enough to cement her as both a geek and a girl power icon, but she continues to impress on both stage and screen…. END_OF_DOCUMENT_TOKEN_TO_BE_REPLACED

The last day of Dragon Con is always bittersweet as the con starts winding down and everyone from fans to guests starts to head home. We decided to take one last swing through the autograph room and took the opportunity to ask some of our favorite actors one last question: 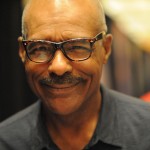 Michael Dorn is one of the few Star Trek actors who got to play his role across multiple shows and even multiple generations. He originated the role of Worf on Star Trek: The Next Generation, got to play Worf’s grandfather (also named Worf) in The Undiscovered Country (which took place during the era of the original series), reprised the role… END_OF_DOCUMENT_TOKEN_TO_BE_REPLACED 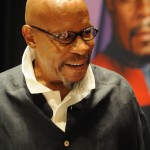 Actor, singer, and professor, Avery Brooks is best known to the geeky crowd as Captain Benjamin Sisko from Star Trek: Deep Space Nine. Brooks returned to Dragon Con this year, after a three year absence, to commemorate the 20th anniversary of the show. The Daily Dragon sat down for a chat with him in the Walk of Fame. Daily Dragon… END_OF_DOCUMENT_TOKEN_TO_BE_REPLACED