“The Order You Appear On the Sheet is The Order You Appear on Stage…” An organizer struggled to shout all the rules across the crowd. The contestants listened intently before rushing back to their hectic preparations. Beauty worthy of a goddess does not come casually, even to these fair maidens, and they work hard to be this beautiful. 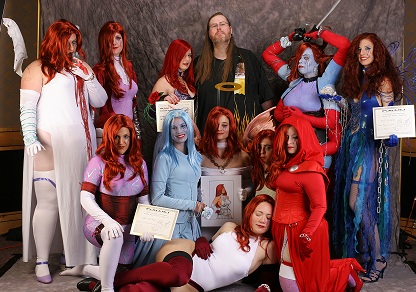 The many goddesses of the Dawn Look-Alike contest packed in behind black curtains, listening intently to the explanations of the details of the contest. They checked their hair and make-up in mirrors, and helped each other with costumes. No one had to tie a difficult lash alone.  Dawn, as every fan knows, comes in all shapes, and all sizes, and all ages. However, there is one constant: she is always beautiful. Different contestants came to Dawn in different ways. Many were drawn to her beauty.

“I like all the outfits she wears,” said Darr Halstead, dressed in an elaborate outfit of her own creation. Meredith Brewer was wrapped in chains and roses and diaphanous white. Unsurprisingly, she said “I love her chains and roses! Fierce but feminine at the same time.” Daria Medved, an art student that was looking quite like a young earth mother with her green corset, knew who to blame for all this beauty. “Linsner’s artwork,” she said. “I love his artwork.” Sheila Cliff, a raucous Dawn with a hint of Georgia in her voluptuous curves and modern stretch-pants and T-shirt, said of Dawn, “She can eat whatever she wants and she’s always skinny!” Numerous others celebrate the message of the comic book hero. Leanna Gable called Dawn, “…a positive role model: brave and confident.”

Anyone who still, mistakenly, considers comic books to be a boy’s obsession would do well to see so many women of all ages and shapes celebrating a character in a comic book that inspired them towards their own inner Goddesses of beauty, and power. These women will take the stage to embody that Goddess, and–in many ways–this contest is a celebration of women of all sizes, shapes, and ages.

Courage and confidence, and the careful ministrations of friends, volunteer den mothers, commenced. The many and diverse Dawns, like true Goddesses, took their time to put themselves together. Red hair–natural, dyed, and bewigged–needed combing. Final details needed careful sewing.  For a few minutes on stage, these many women, and a few men, pushed themselves hard to be ready in time for the stage lights. Props emerged, including a giant, inflatable globe, various toy swords, and wings and chains. First, they would be photographed.

The workmen in charge of the stage were no exception. They put together a ramp to aid the women up and down, but decided against safety rails. They were going to have to rely on den mothers to help the ladies off the stage. The rails were too risky for all the wings and extended props of the elaborate costumes. 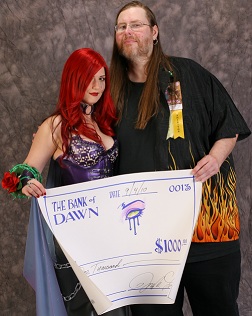 The crowd lined up around the block outside. Coming inside, they filed in expectantly, with cameras and plenty of costumes of their own. They began polite enough, but it wasn’t long before staff was shouting over them to try and direct the traffic to fill up every available chair. Staff had to take the microphone to explain the very complicated system of filling up every seat in the auditorium: If one is saving seats, use the number system to count exactly how many seats one needs to save–no more, no less. Also, it is important not to take seats from the differently-abled guests. Unsurprisingly, this did little to stem the tide. And new waves of people continued to enter the hall who had heard nothing. With a projected start time of 8:30, and the stage set, the contest was slated to begin as soon as all the seats filled in, and all the Dawns and Suzy Sins could cycle through the photographers. By nine o’ clock, the room had filled all the way to the back, and the many Dawns lined up in the wings of the stage, ready to stand before the crowd here to celebrate them.

Voltaire took the stage looking dapper in a black suit with a shining silk tie and pitch black hair, looking the part of the part-time rock star, full-time beauty pageant host. The 13th annual Dawn look-alike contest was ready to begin! “We are here, looking for a Goddess…a human incarnation of Dawn,” he said. She has three tears streaking down her left side of the face. She has red hair sweeping down the right side. She has chains and roses and thorns, symbolizing heaven.  Perhaps she is lace. Perhaps she is armor and swords.

The judges include former winners of the contest, still resplendent Goddesses, and one very qualified man: the creator of Dawn, Joseph Linsner.

Every aspect of femininity appeared in one fashion or another before the night was through, from Raggedy-Ann Dawn to Medieval Dawn, Phoenix Dawn to New York Dawn, and dozens of original variations. The crowd cheered for each, cheering for beauty in all its forms.

Of note to future Dawn contestants: Dragon*Con crowds love Dawns with beautiful wings and/or inventive reinterpretations of beauty beyond just tight corsets.  Over-the-Hill Dawn was a clear crowd favorite, and the Oriental fan-style wings brought loud cheers. Creativity, and rethinking classic tropes–fitting for the comic books’ constant re-imagining of feminine beauty–these are what bring the crowd’s appreciation. The Twin Dawns, real twin sisters Alia and Athena Sanchez, put on an impressive routine dancing on two sides of a “mirror,” until one pulled the other through into reality. As the night continued, the judges undoubtedly had no easy task picking winners.

Joseph McDermott writes for the video game industry by day, at Xaviant Software. At night, he writes fictions. His novels include Last Dragon, which was #6 on Amazon.com's Year's Best SF/F of 2008, shortlisted for a Crawford Prize, and on Locus Magazine's Recommended Reading List for Debuts. Maze, his second novel, will be out in 2011, from Apex Books, along with Never Knew Another from Nightshade Books. If you see him scampering about the convention, offer him Peanut M&Ms, iced coffee, and high fives (because he is awesome!).