One of the greatest moments in the history of the general ease in intergalactic tensions across the universe came when the Klingons opened entry into their infamous annual beauty pageant to females of many and diverse species. Most of the Klingons, for instance the reigning Queen of all Klingon Beauty, Lucy Maria Boydston, was pleased at the inclusion. She said it was “…wonderful! Klingons are a fair and unbiased race. We love all the other races. We support the Federation of the Beauty Queens!”

The pageant, helmed manfully by the navigations of M.C. Ensign Harry Kim (Garrett Wang), celebrated more than just Klingons. Orions were an unsurprising inclusion, but few would have expected the Borg to send their own lovely emissary to participate. Despite the difficulty of having to choose between such lovely examples of universal beauty, each pageant must have a winner and a runner-up.

Gia Dax (also known as Deena Roth) wore a dark brown two-piece to accentuate her race’s brown, head-to-toe markings. She exuded the calm of the centuries when she accepted her trophy as runner-up. Asked for a comment later, she only said, “I’m here as one of the GMX Girls.” 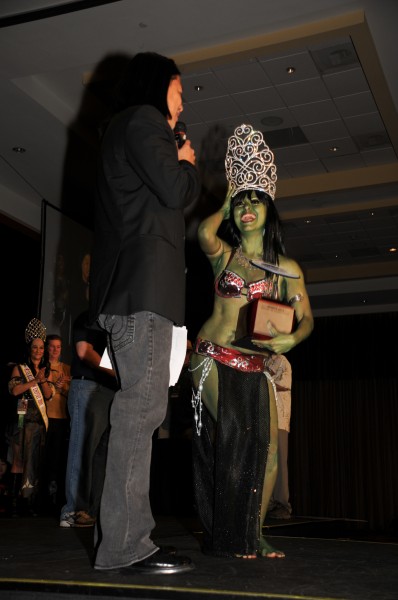 (Photo by Grace Moss)
The winner of the first annual Star Trek Universe Pageant was an Orion Slave Girl named Alejandra Sanchez, rumored to be from Mexico, a sub-continent on Planet Earth, located in Sector 001. She was surprised and ecstatic about her victory. She accepted her crown graciously from Lucy Maria Boydston.

Despite the assertion of universal sisterhood, for a brief moment, Ensign Harry Kim had to intervene to prevent a fatal injury during the placing of the large, somewhat jagged crown upon the head of the submissive Orion Slave Girl. This one dangerous moment passed with all unharmed, and the Federation of the Beauty Queens began safely for all contestants and species.

When asked for a comment to share with the whole universe, she said she wanted to tell the universe about “…the needs of the Orion girls, the needs of the normal girls.” With her new position of universal, intergalactic acclaim, no doubt these needs have a new champion!

Joseph McDermott writes for the video game industry by day, at Xaviant Software. At night, he writes fictions. His novels include Last Dragon, which was #6 on Amazon.com's Year's Best SF/F of 2008, shortlisted for a Crawford Prize, and on Locus Magazine's Recommended Reading List for Debuts. Maze, his second novel, will be out in 2011, from Apex Books, along with Never Knew Another from Nightshade Books. If you see him scampering about the convention, offer him Peanut M&Ms, iced coffee, and high fives (because he is awesome!).