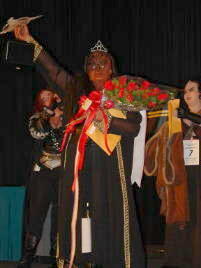 Ma’Jon of the Clan IpaQ (Marjan Peltier) wrested the Miss Klingon Empire title from seven other formidable warriors vying for the honor. Ma’Jon stalked Master of Ceremonies Eric L. Watts in formal attire trimmed with gold. She demonstrated her skills as the Head Chef of the Klingon Imperial Palace by stabbing and milking the young from a prized Klingon delicacy saying, “Klingon food fights back.” When asked who ruled pageant judge Mardok’s family, Mardok or his wife, Ma’Jon asked the Chancellor to “stand up,” then replied “Mardok,” to the roaring approval of the crowd gathered in the Regency Ballroom.

‘Twas the night of Ql’lop tlhingan wo’muv, and all through our Hall
Sat warriors with mates and children, grown and small.
Sacred bat’leths were shined, many candles were lit
In hopes that we honored Kahless as was properly fit.
The bloodwine was Juriss and the stories were great
Though to one there was no other to equate.
‘Twas told by the mate of my brother, KalZine,
About a warrior who’d traveled to a world and time
Where humans were basic and of Klingons nothing knew,
Until this incident, from which a fable then grew.
He was heading towards Qo’nos after a long duty tour
With a gift in his hold for his child of four.
A team of matched Targs, numbering eight in all,
He’d captured in battle, his family to enthrall.
When an uncharted anomaly appeared dead in his path
And no dodging or weapons helped escape from its wrath.
The ship was battered and circuits were blown.
The warp core was off line, damage extent unknown.
Reports from repair teams began to arrive,
Many warriors were injured, but all were alive.
A breach somewhere near the aft deflector disc,
Had placed the Targ team in life support risk.
Weakened sensors revealed a planet below
With air and water adequate for his unusual cargo.
Donning his furs of House colors red and white
He rounded up the Targs and transported into the night.
They materialized on a lawn with a crash and a clatter,
Enough to draw a human to see what was the matter.
Avoiding First Contact seemed to be the prudent route,
So he yelled at the Targs and threw curses about.
“HighoS, Sujatlh `e’ yImev, `petaQmey’, qaStaH nuq jay
bortaS bir jablu`Dl’reH QaQqu’nay!!
But the Targs jumped angrily, snorting ugly loud cries
And in the planet’s low gravity, began to arise.
Shocked quiet they were as they scrambled for the roof
Barley catching the ledge with the sharp claws of their hoof.
With a curse and vow to kill every one
The warrior jumped high to where the Targs had run.
But the roof was covered in cold wet snow
And he slid right by them into a dark pit below.
He landed with a thud but jumped quickly to his feet
Reaching for a weapon from which an enemy would retreat.
His hand grasped at air, his weapon somehow lost
Somewhere during the fall it must have been tossed.
At the sound of a laugh, he jerked his head
And saw a human, who seemed nothing to dread.
Still, he reached slowly for the pack on his back
Face red with heat as he prepared to attack.
But the human just stood there, too foolish for fear
No honor could be gained by killing one so queer.
So he turned and searched for his missing tool,
Ignoring the human who really seemed a fool.
With a triumphant shout, he grabbed the lost prize
And, vaulting from the fireplace, up the chimney he did rise.
He sprang at the Targs, deftly roping them all
Then to his ship he gave an urgent call.
His communicator crackled and gave a whistle,
Then they dematerialized like the down of a thistle.
And he yelled as he left from up on the high ledge,
YIlop! Wa’IeS chaq maHegh!
And so First Contact was actually made
With humans long before the Vulcan brigade.
They tell the tale of the warrior with the Targs
But for some reason, they call him Santa Clause!!

(Any errors in transcription claimed by Amy Herring)