Matthew Lewis (Neville Longbottom) and James and Oliver Phelps (Fred and George Weasley), the busy stars of the Harry Potter movies, kindly agreed to adjust their schedules to answer a few questions for the Daily Dragon.

DD: In what ways are you similar or different to the character you play in the movies? How do the differences affect how you play the character?

Matthew Lewis (ML): I’m quite forgetful and very clumsy, kind of like Neville. I have to wear a fat suit and have different hair, which is kinda odd, but it helps to get in character.

James Phelps (JP): I am about 70% like Fred in the way I like to have a joke and to have a good time. Though I don’t have the ginger hair, and if I am doing a joke or a prank, I don’t really like to blow things up.

Oliver Phelps (OP): I think I am similar to George. However, I do have limits, where he doesn’t. When playing him, I can do pretty much anything I want.

DD: Had you read any of the Harry Potter books before you were chosen for the part? What kind of books do you usually read?

ML: Yes, I’d read the first four before my audition. I like crime thrillers and horror, vampire novels and stuff.

JP: Yes, I had read the first three books before we started. I just started the fourth one as [the first movie] started.

OP: Yes. I had read the first three when we went for the audition. I like to read autobiographies.

DD: People must recognize you often these days. How has that affected your life?

ML: Not a huge amount. I like meeting fans, but all are really nice and appreciate that I’m out with my friends and aren’t bad in any way.

JP: Everyone has been really nice. It’s cool when meeting people, but that’s the only thing that’s changed.

OP: Not too much, really. Everyone’s cool to us, which is wicked. People are nice to us, and we appreciate it.

DD: James and Oliver, it must be tempting to switch places. Have you ever tried to be each other, and what happened?

JP: We did once or twice at school, and on set we’ve tried it in rehearsing for scenes but never in front of the camera.

OP: We did at school every now and then. We always got away with it.

DD: Mrs. Weasley can’t tell Fred and George apart. Did your mother have the same problem, and if so, how did she deal with it?

JP: No, our mum has always been able to tell the difference, though we have never been dressed the same.

OP: No. We could never fool mum. 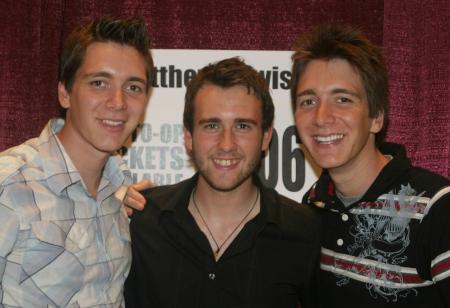 DD: Matthew, what do you like most about being in the Harry Potter movies? Least?

ML: I like traveling the world and meeting wonderful people. Least, I miss being able to play soccer when filming.

DD: James, how do you feel about Fred’s fate in book seven?

JO: I like it. It showed that characters from the first book were still not safe.

DD: Matthew, what do you think of Neville’s overall character development in the Harry Potter series?

ML: I never expected it. It’s been a lot of fun, and I can’t wait to carry on doing it in future. Neville is a character I love, and I’m so happy for him in that he’s really come out of his shell and showed the world what he is capable of.

DD: What’s the strangest encounter you’ve ever had with a fan?

JP: When we were swimming in the sea in Mexico, a lady swam over to us and asked if we were in the movies. We said yes. She smiled and swam off. It was cool.

OP: Today (Sunday) someone asked us to sign a cup. It so happened to be what we were drinking out of the day before.

DD: If you could have any magical ability, what would it be and why?

ML: Be invisible so that I could have a laugh and do pranks and stuff.

JP: To turn back time. I have a thing about running late.

DD: When the Harry Potter movies are finished, what would you like to do next?

ML: I’d like to continue acting, if possible, because I’ve done it for 13 years and I love it.

JP: Either something in front of the camera, whether that be in acting or presenting, or the other side of the camera on an [assistant director]-ing role or producing.

OP: Something in the industry.

DD: Thank you. We hope you’ll return to Dragon*Con in the future.