Artist Don Maitz, who judged the treasure chests, could not attend because he was currently judging the Dawn Look-alike contest. A member of the audience joked that Maitz was judging “another kind of chest.”

This year’s art show featured spellbinding creations from a group of highly talented artists. Lockwood said it was difficult to choose the winners, but there was one piece he wished he had painted. “[It] turned my head the hardest and gave me a sore spot in my neck when I saw it,” he said as he presented the Best in Show award to Matthew Hughes for “Becoming.”

Hughes’s award-winning painting depicts a woman holding a golden apple skyward, her blank eyes staring. Although her hair, in muted tones of green, swirls toward the heavens, roots twine around her, holding her from below. She seems to be Eve, caught in an eternal struggle between Heaven and Earth, yearning to rise yet held inexorably back.

Lockwood mentioned returning to another piece several times. He awarded first place to Stephanie Pui-Mun Law for “Fox Knot,” an intricate painting of foxes coiled playfully around a Celtic-inspired design with a unique Oriental flair. Second place went to Marc Poole, for “Forgotten Souls,” a majestic depiction of two wolves in contrasting light and darkness, set against an imposing yet distant city on a cliff, which suggests the feeble strength of man against the powerful realm of nature. In third place was Samantha Hogg with “Hearts Beat,” a tender yet mournful embrace between a man with bat-like wings and a swan-winged woman who seem to be accepting the futility of their forbidden love. Samantha, however, accepted her award with wide-eyed surprise and delight.

While not everyone could receive an award, just being accepted for the show was an achievement. Each artist was selected through a rigorous jury process. More than 300 artists applied for about 130 available booths at the show. The competition was stiff, and the jury had to make hard decisions, but the results were worth the effort. Whimsical paintings and breathtaking works awaited around every turn. Congratulations everyone on a marvelous show. 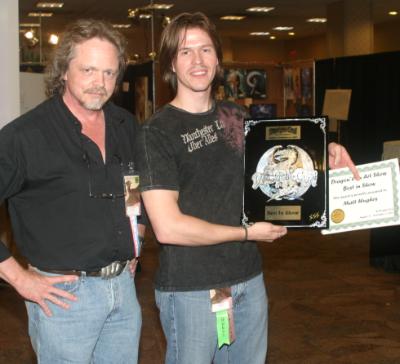