Jack McDevitt is that rare commodity, an accomplished storyteller who captures you in his fiction while subtly challenging your intellect. Winner of the 2006 Nebula award for his novel, Seeker, he will be a guest at Dragon*Con for the first time this decade. Jack consented to an interview by email as an early introduction to Dragon*Con 2007. 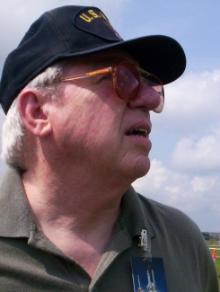 Jack McDevitt (JM): Assorted careers ultimately make you the person you are. And your writing is a reflection of that. A lot of the people I went through high school with still live in South Philadelphia. Had I done that, I’ve no doubt my work would be different, assuming there’d be a product at all. An example: In 1970 I was at Wesleyan University taking a classical history course so I could get my M.A. and my teaching license. The instructor threw a barbecue for us, during the course of which he described a Renaissance scholar who went to Greece, found a batch of lost manuscripts in a trunk. On the way home, a storm blew up and the ship went down. And the trunk with it. What was in the trunk? Some of the lost plays of Sophocles? One of the missing Homeric epics? Who knows? But the idea has stayed with me and 35 years later stories about irreplaceable things that get lost still wipe me out. And show up all the time in my writing.

DD: As an officer in the Navy, you must have traveled widely. Is there any particular place in the world you’d like to visit or return to?

JM: Japan. It’s a lovely country full of memories for me. I got to the top of Fuji, had my first experience with a different culture, found time to do a lot of boating, could still play a decent game of softball, learned how to play shogi, made a lot of friends, and in general had a marvelous time.

DD: According to James Patrick Kelly, in his introduction to Hello Out There (Meisha Merlin 2000), you published your first short story in your 40s and your first novels in your 50s. Do you have any advice for other late-blooming writers?

JM: Get lucky. I always wanted to write. Wrote my first novel when I was about eight. (It was a Batman.) A year later I wrote The Canals of Mars. When I went to LaSalle in 1954, I won the freshman short story contest, and they published my story, “A Pound of Cure,” in the school’s literary magazine. I figured I was on my way. Then I read David Copperfield and decided there was no way I could compete with Charles Dickens. So I stopped trying. Made no effort to write more for 25 years. I didn’t realize I didn’t have to compete with Dickens. Then one day, when I got frustrated with my job—teaching customs inspectors—I complained to my wife Maureen about being bored, and she suggested I write the SF story I was always threatening to. I did and it sold to T.E.D. Klein at The Twilight Zone Magazine. Lesson for others: If you want to do it, do it. Don’t just talk about it. And you don’t want to fail to do something you want simply because you never tried.

DD: How about any advice for young writers starting in their teens and early 20s?

JM: Be smarter than I was. I wrote a story for Anthony Boucher when I was 17. He responded with a written message explaining why he wasn’t going to buy the story but encouraging me to try again. I never did. Not during his tenure. That was a serious blunder. Young writers should get it going and submit the stories. And start with the top markets. And not get discouraged if success doesn’t come immediately. And keep in mind something else: Most people, in my experience, are smarter than they realize. We go through those early years with parents and teachers showing us all the stuff we do wrong. Don’t touch it, you’ll break it. They mean well, but after a while we begin to develop a mindset that we’re limited. The most important characteristic of a good writer, aside maybe from being able to deliver a punch line, is that she has learned to believe in herself.

DD: You’ve announced the publication of Cauldron, the last novel in your Academy series (Ace, November, 2007, forthcoming). Given that you’re winding up that series, can we expect any more novels in the Talent for War/Polaris/Seeker line-up?

JM: The Devil’s Eye will be released next year. It’ll be Alex Benedict’s fourth outing.

DD: The alien archaeology and xenobiology in the Academy series are fascinating. What more may we see from you on these subjects in future novels and short stories?

JM: I suspect present tendencies will continue, Amy. Alex Benedict will (I hope) be back to solve future mysteries, and that means more odd objects found in the soil of distant worlds. Aliens tend to be more interesting, more mysterious, when they remain at a distance. I suspect that when the first one shows up and sits down for a pizza with us, the romance will go away and we’ll lose interest. At least in him.

DD: Devoted fans love sequels and prequels. In addition to what’s mentioned at yourwebsite’s FAQ’s, have you given any consideration to more stories in the Eternity Road timeline or on your other “open” worlds featured in Ancient Shores or before the events described in Deep Six and in Chindi?

JM: Originally I’d planned to do no sequels. But I gradually realized that if you have an idea for a novel with, say, starships, there’s no point starting from scratch each time. How much ground does the starship cover in a day? What sort of spacesuits have they? What kind of ground transportation? So it’s easier to work within a given universe. And of course you become acclimated to the characters. As do the readers. All this is a roundabout way of saying, as politicians like to do, that nothing’s off the table.

DD: Congratulations for your Nebula award for Seeker. Of course, you’re no stranger to awards. Your first novel, The Hercules Text (1985), won the Philip K. Dick award, and the fourth Academy book, Omega, won the 2004 John W. Campbell Memorial Award for best novel. You’ve also won the Phoenix and the SESFA lifetime achievement awards. I understand that you’ve been a Nebula finalist in nine of the last ten years. How does the prospect of award selection affect your writing and project selection? What advice would you give to emerging writers with respect to writing awards?

JM: I don’t think awards affect anybody’s decisions regarding what to write. Everybody works the same way: You write the sort of thing you like to read. Whatever blows you away. Try to gear something toward winning a prize and the passion goes south. Which brings us to the advice for new writers: Forget the awards. Write what you’re good at. If the awards come, fine. If they don’t, there’s still a substantial amount of satisfaction in this kind of career. And even without an award, it’s always possible that when they dig up that time capsule outside Moonbase, one of your books will be in it.

DD: In what ways will winning the Nebula affect the marketing of your work or your personal appearances’ calendar?

JM: I don’t know about the marketing. I don’t have much to do with that. I write the best book I can and hope the readers enjoy it enough to mention it to others. Personal appearances though might be a different matter. I can’t say whether it’s a coincidence or not, but this has been by far my busiest season for guest appearances of one kind and another.

DD: “First contact” is a recurring theme in your novels beginning with The Hercules Text and more recently in Odyssey. In the foreword to the revised edition of THT (in Hello Out There, 2000), you said that the efforts on that book had left you with “the suspicion that we do not really want to hear from the stars.” In spite of this lingering doubt, is there any chance that you may move onto stories on the aftereffects and the progress of human contact with other sentient species?

JM: I seem to be unable to stop. Sure. I’m entranced by the idea. And I’m intrigued that it matters so much to us. Why do we all love the idea of extraterrestrial civilizations? Why do SF audiences get so upset with me if I tell them I think we’re probably alone? So sure, as long as I’m able to work, I’ll be looking at the idea.

DD: What future plans do you have for tales about the Goompahs, the philosophical aliens encountered in Omega?

JM: None at the moment, mostly because I will probably not be going back to the Academy world for a while. When that does happen, I may do a Hutch prequel. I’ve also thought about writing a second series around her son, Charlie, who makes his first appearance in Cauldron.

DD: Will you be participating in any writing classes or workshops as a teacher in the coming year?

JM: Nope. I’m going to do one in Alberta, Canada, next week, Amy. But that’ll be in the past by the time we do Dragon*Con.

DD: May we expect your return to Dragon*Con in future years?