Even Master of Ceremonies Eric L. Watts’s spirited performance of “Hey, Miss Klingon” could not overshadow the political message of the newly-crowned 2007 Miss Klingon Empire, VarkNa B’traughh (Valerie Rice): the Klingon campaign to conquer Earth. “We must save the humans from their biggest enemies–themselves.”

The pageant opened with “Klingon Rhapsody,” accompanied by two trembling, red-shirted Federation security guards. Only one guard appeared as a captive during the event, running errands and pouring water at a Klingon warrior’s command, as well as toadying to the one human friend of the Klingons, emcee Watts. The fate of the second red shirt remains unreported, and he is feared dead. 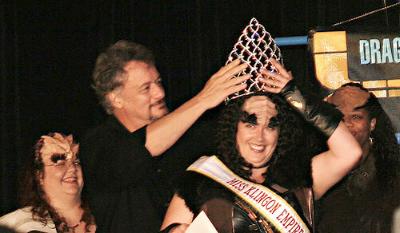 Fighting demonstrations, some with musical accompaniment, dominated the talent contest. Nej Vestai Le’nIvnav beat a puny Jedi into submission while singing “When you got it, flaunt it” from The Producers. Zolamonga Durku demolished a Klingon warrior, who was later seen skulking from the Regency ballroom in shame. Askade Yel’snrep undulated through a traditional Klingon bat’leth dance. SajQa’ sutai Fenix led the audience in a rousing war anthem sung in her native tongue.

Delayed by battle, Di’Larh vestai-Dokmarr marched onto the stage late, bloodied and glowering with fevered eyes. She recited a war poem, flanked by her wounded troops, bleeding but unbowed. Pacing across the stage, she repeated the battle cry, “today was a good day to die.”

Contest winner VarkNa B’traughh wowed the crowd with her version of a Hawaiian hula, complete with grass skirt and coconut-shell bustier over her armor. The narrative dance included heavy drinking and an emotional moment when the future Miss Klingon Empire pummeled, kicked, and stamped an offensive jerk into the sand.

When asked what she will do during her reign, VarkNa B’traughh told the Daily Dragon, “Devote myself to the Klingon effort to defeat Earth, because I can make it succeed.”