Russell Segars was a character in the role-playing community of Northern and Central Georgia from the early eighties until this year. He influenced hundreds of people from all walks of life and introduced hundreds more to the wonders of gaming.

Russell spent his childhood reading, often staying up long into the night with his friends, exchanging moonshine philosophies or discussing worlds of other times and places. He enlisted in the Marines, where he learned the power of death at his own hands. Russell successfully trained as a meteorologist and was discharged honorably after his service to his nation was done. He became a law enforcement officer out west.

Russell learned computer programming in various machine languages, and then moved on to became the face of the movie theaters of Gainesville, Georgia, managing their operations.

Russell always had several games going at once. He caused raucous laughter, and brought hours and hours of sheer enjoyment (and exasperation). Russell was a prominent gamer and referee back in the Burning Times: when rule books were confiscated and piled high and set alight to burn out the deviltry their lurid covers promised. He did not concern himself with what others thought, and promoted his hobby with guileless enthusiasm. He embraced any with the smallest spark of imagination and provided fuel for that flame.

Russell led an austere life during his time in this world, seeking not material wealth or clutter, but his imagination roamed free and he accumulated many treasures of the mind’s eye. His life was full of adventures both real and imagined. While those who had the privilege of knowing him mourn that we do not have him in our lives, we know that beyond the Styx where he is free of the lukewarm clay, he is on to new adventures beyond mortal ken.
—Eulogy by Steve Dice 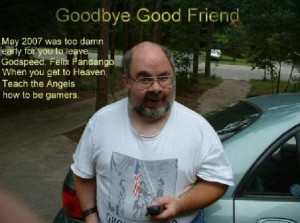