Why I love Dragon*Con: 67 beautiful women (and one man) onstage in costumes ranging from elaborate to barely existent where, as contestant Athena said, “Attitude is more important than the costume.”

Snapshot impressions of the costumes in the 10th Annual Dawn Look-ALike Contest include “Best Armor” winner Gayle Klar’s carbon dioxide powered wings that opened and flapped at the push of buttons, cleverly concealed in her palm; the Yaya Hahn-designed black feather wings of contest winner Ruby Rocket that floated and swirled in seeming defiance of gravity; a stunning multitude of snaps, velcro, and Goddess magic that allowed Aurora Celeste’s dress to tear away on stage to reveal the Goddess within; as well as Dawn brought to the world of Chinese opera by Jamila Sisco, the forest by Jennifer Ofunne, the speakeasies of Prohibition-era America by Sarah, and a Dawn of the Dead worthy of George Romero by Gayle Grant.

Yet it is the inner strength, beauty, and self-confidence of the contestants that make the Dawn Look-ALike contest inspiring and powerful to both contestants and audience.  There was Lisa Kufs, whose participation was both tribute and fulfilled promise to a friend lost to cancer.  Angelle, with poise born of a survivor’s experiences, who stated, “No matter what happens in your life, nothing anyone else does can change who you are.”  And Teona Clark, who asserted, “The Goddess is in everyone.” 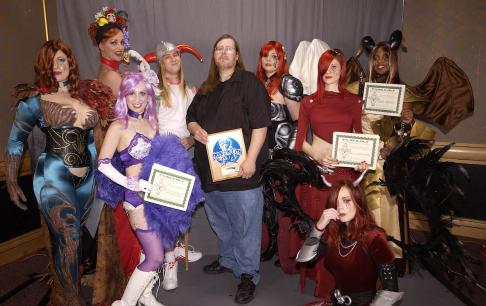 Moscow, Innsbruck, Cairo, Tokyo, New Delhi, Santiago: these are just some of the far-flung places and exotic locales where you will not find Paul J. Iutzi. Instead, you must seek out the little known hamlet of Normal, Illinois, where he lives on a vast, perhaps even palatial, estate, spending most of his time dodging the owners and their dog Chambrié. Between escapades of astounding interest, he manages to find time to both write what will in later generations be seen as the greatest works of the English language since Brother Michael of Sashay-upon-the-Wabe first split the infinitive during that heady spring of 812 A.D.