On Saturday at 11:30, the actors from Battlestar Galactica took center stage in the Regency Ballroom for a lively discussion typical of the GQ’s from BSG. Aaron Douglas, Richard Hatch, and Jamie Bamber fired innuendos and complements like ordinance out of a viper.

Douglas confirmed that his last-minute visit to Dragon*Con had been influenced by his fans’ email campaign to get him to Atlanta after Katee Sackhoff cancelled. 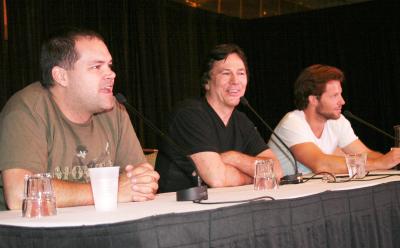 The chief’s evolution as a character on the show provided plenty of material for discussion. When asked how he felt about the change of direction, Douglas said he “really liked [it].”

Bamber replied, “Who wouldn’t want to be [in your position]. I’m very jealous.” Bamber spoke of the evolution of the Cylons during the series. “When they first appeared, they were scary, titillating, and sexy. Along the way, they’ve developed in an emotional light dealing with the complexities of human interaction.”

Inevitably, a fan asked Hatch about the transition from Apollo to Zarek. He said he doesn’t play Zarek as a bad guy. He’s thought of the character as what Apollo would have become after 25 years in prison, working his way through the epic struggle to come back from that dark place. “Heroes are flawed human beings,” he said. “You don’t have to be perfect to be somebody valuable.”

Given the title of the panel, the audience wondered on Hatch’s opinion of Bamber’s portrayal of Apollo. Hatch said Bamber was, “doing an extraordinary job. He’s truly someone who has the metal to go the distance and put [all of Apollo’s complexities] together. He employs the soul and spirit of [Apollo].” In response, Bamber said of Hatch, “I’m standing on the shoulders of a giant.”

A participant asked Hatch about his reactions to the scripts. Hatch responded, “When I get the script, there’s some trepidation, wondering if they’re going to put [me] out an air lock.”

Going into the fourth and final season of the show, no one is sure what to expect, but one thing is sure, an end is coming.

“All the writers just ran away to Lake Tahoe to figure out an ending for this thing,” Bamber said. “I really feel bad for the hotels. I imagine there is all this writing on (wall) panels. I mean how are they going to do something better than what all of you have thought of? How they going to surprise us?”