Edward James Olmos is the distinguished and celebrated actor currently starring as Admiral William Adama in the SciFi Channel’s Battlestar Galactica. He’s won Emmy and Golden Globe awards for his work in Miami Vice, been nominated for an Oscar for his portrayal of Jaime Escalante in the 1988 film Stand and Deliver, and a Tony award for his role in Zoot Suit.

Daily Dragon (DD): Welcome to Dragon*Con. You acted in the groundbreaking 1982 Science Fiction classic film, Blade Runner, based on Philip K. Dick’s Do Androids Dream of Electric Sheep, and declined the offer for the lead role in Star Trek: The Next Generation. What components of the science fiction palette drew your interest to Battlestar Galactica? 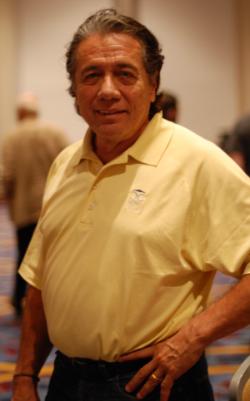 Edward James Olmos (EJO): The main issue is the reality that was hit in Blade Runner, was one that I really wanted to emulate with Battlestar. It was the only way to touch this kind of material; an opportunity to walk into a door that was opened by Blade Runner but no one had ever walked into it. Meaning, that we’re talking about the future, we’re talking about intergalactic travel, but we’re also talking about a reality based on what we actually know as being fact. In other words, we don’t know if there [are] any aliens in outer space; it’s all right if there are and it’s all right if there’re not. Basically, the reality that was hit by the usage of our own technology to really make the world that we wanted to look at and not bring in outside forces of alien-type looking creatures was what I was really interested in.

To build a character driven piece of work where [viewers] would actually learn about these people that we’re looking and talking about [on Battlestar], as you would do in say The Sopranos, or The West Wing, or ER, or any dramatic show. We did it, and I’m grateful that Ron Moore and David Eich were strong enough to really live up to their word. I asked them if this was the way that we could make [Battlestar], and they said, “Yes.”

DD: You’ve demonstrated a strong sense of social responsibility and science fiction is known for making social statements via accessible means. Which social commentaries expressed on Battlestar Galactica resonate most with you?

EJO: Well there’s so many it’s unbelievable. I think the most profound one has to be nuclear annihilation which has happened before and it will happen again in Battlestar Galactica. What seems to be about to happen on [our] planet and could happen again.

DD: Did you read science fiction growing up? Do you have a favorite or remember a book that influenced you?

EJO: Fahrenheit 451 by Ray Bradbury and of course there are quite a few others that I have read. Really it was a matter of Rod Serling’s The Twilight Zone and Alcoa Presents: One Step Beyond, which was another program. The whole concept [of these shows] opened up the world to us. It was an audio visual event that was so prolific I had a great opportunity to understand it.

DD: What are you reading now?

EJO: At the present time, I’m not reading any science fiction, but I am reading a lot of books on the border because I’m doing a border story that I’ll be working on right after I finish [directing] the movie for Battlestar Galactica. Then I start into a Carlos Fuentes novel called The Crystal Frontier, and I will be directing and producing that one.

DD: Specifically, the border between the United States and Mexico?

EJO: Right, but I also mean the border between people and cultures; the borders within ourselves.

DD: You’ve proven your skills behind the camera directing five episodes of the show. Tell us about that experience.

EJO: It’s been extraordinary and a lot of fun. I helped create the piece in my own way. I helped in the production of the piece, then [was] given the opportunity to help direct the piece. It was fantastic.

DD: You spent 20 days in prison for protesting against the U.S. Navy’s actions on the island of Vieques, Puerto Rico. Did you feel a personal connection to the suffering of the characters “left behind” on New Caprica at the start of season three?

EJO: Very much so. The correlations between what’s going on here on the planet today in 2008 and the way the show pulls from that and then interweaves that reality with our reality on the show is fantastic. It’s something we’ve done since the beginning of the show. Vieques was a very important and rude awakening for a lot of the United States of America. And they didn’t quite understand it until we were arrested and then thrown into prison. Then the scream went out, “Why are you arresting him?” [The Navy] has been bombing there for a long time, and the bombings had to stop. Of course what has happened on our show is also a cry for humanity to take a good look at what technology [is doing] and what we are doing to each other.

DD: In your teens, you were a lead singer in the band, Pacific Ocean, and in 2006 you appeared in Snoop Dogg’s “Vato” video. Does music continue to play a large role in your life?

EJO: Yes, it’s an integral part of my life. The words that I learned in music when I was seven, eight, nine years old when I started into it-like high fidelity, ensemble, counterpoint, solo-they are all words that are used in theatre and in acting. It’s something that I’ve grown to understand that the harmony in which one works with somebody, the kind of counterpoint that one can do for one another in music is the same as they do in acting. That mindset is the one that really got me to the point of being who I am today.

DD: And the way that a chord can really resonate and sing for someone. Is that the same as the chemistry between two actors?

EJO: Exactly the same. And between a group of actors working harmoniously on something.

DD: With time, we all begin to examine the nature of the mark we’re leaving on our world, and you’ve left a whopper via your work as Bill Adama, not to mention your creation of Latino Public Broadcasting, and your contribution to the book project, Americanos: Latino Life in the U.S. What direction will you take with your next endeavor?

EJO: We’re going to finish up doing an added film to the storytelling process of Battlestar. Then we start into directing a piece on Carlos Fuentes’s book, The Crystal Frontier. At the same time, I’m working with a couple of different producers on different things that are happening for first nation people.

DD: The storyline involving the imminent death of President Laura Roslin is heart-wrenching. Has it pinged at your own sense of mortality? Do you have a bucket list?

EJO: I don’t have a bucket list, but I do have a wish list. My love for the character of Laura Roslin, as an artist, is something I can’t even tell you. It’s been fantastic. I can honestly say “thank you” to the writers for making the kind of story that evolves in this manner because the art was just beautiful. I don’t want to give away anything that happens in the story, but I will say that I think that everyone should be prepared for not too happy of an ending.

DD: You’ve had such a varied career, and soon we’ll hear your voice in Beverly Hills Chihuahua. Did you enjoy doing a voice role?

EJO: I’ve done a couple of voice roles in my life, and Beverly Hills Chihuahua was quite a surprise for me. I did it to help Disney at the time when they called me. I saw the film, and it’s a wonderful family film. I’m very thankful to be a part of it.

DD: Thank you very much for graciously giving of your time with us today, and we hope you enjoy the rest of the convention.

EJO: Thank you very much for your kindness, your respect, and for this interest.