Peter S. Beagle is best known for his novel, The Last Unicorn. This is the fourth year Peter has come to Dragon*Con. In addition to speaking at various panels, he was gracious enough to sit down and chat with the Daily Dragon.

Daily Dragon (DD): In an interview by Edmund R. Schubert you mention the importance of music in your life. How does it filter into your writing? 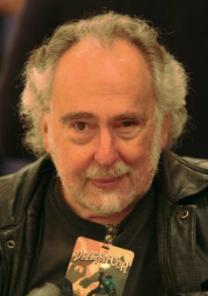 Peter S. Beagle (PSB): It is always there in the back of my mind. This one is a brass scene. This one’s a woodwind.

DD: What musical genres are currently influencing you at the moment?

PSB: George Brassess is always there in my head. My kids got so used to hearing him around the house that he almost became an extra member of the family. They refer to him Petes in the living room playing Uncle George again and later I found that is what the French call him, 26 years after he was dead, Tom-tom George, Uncle George.

DD: Are there musical performance you have attended or plan to attended during Dragon*Con?

PSB: I haven’t been to concerts lately. I will go, I am excited because in September, in two weeks, my favorite Jazz singer will singing in San Francisco. She hasn’t been back in the area for eight years.  Last time I saw her, she’s eighty-one now and I don’t care. She’s Cleo Laine. She’s married to John Dankworth. He’s a great sax player, composer who always backs her. I don’t care how old she is, I’ll go anywhere to see her. Worries me because no one is getting any younger and this may be her last trip to the bay area. She hasn’t been there in a long time but I remember I was driving into the restaurant where I sang, warm up in the car, find out what kind of voice I had that evening. It varies a little. We do not listen to Cleo Laine because we are start trying to try to do 4 octaves jumps and we can’t do that. We are not going to listen Billie Holiday because we will start to trying to phase like that. No on can do that except Holiday but we can harmony with Elle Fitzgerald in the way in. That will be o.k. […] but other than that, no. I listen to people. My musical tastes are old- fashion. I listen to Jazz and classical more than anything else I suppose. […]

DD: Moving towards your writing. What writers influenced you at the beginning of your career?

PSB: Oh, T.H White for certain. James Thurber of The White Deer and Thirteen Clocks. Would give anything to have written Thirteen Clocks. […] And probably in the end, the major influence was a writer I was good friends with for the last 28 years of his life, Robert Nathan, because I always felt my first book was a direct imitation of Robert.

After you know you grow up, you move on, you find your own style eventually, but when I finished Professor Gottesman and the Indian Rhinoceros, I looked back at it, oh, my God, I’m doing Robert again. It’s been all these years. Robert’s been dead for a long time. My God, that was a Robert Nathan story, and I sent the manscript to his widow, the actress Anna Lee. Anna would be the only person to catch this, and she wrote back, “It’s the best story Robert never wrote.” I was pleased.

DD: I know you have said you have to be careful because you will mimic another writer?

PSB: I’m a very good mimic. In the literacy sense, I have to be careful. Sometimes it comes in useful. But other times, I can look back at a book and realize who I was reading that day. In the same way, I know exactly what influence my second wife, who will never speak to me again I’m sure, had on my work. She’s a wonderful writer, and I know damn will that living with her, watching her, and talking to her about writing had a definite influence on the way I work now, and I hope I gave her something back at least, but I know I can tell.

DD: What writers are you currently reading?

PSB: Well, I’m reading,  just finished reading a biography about Charles Schultz, who did Peanuts, which was fascinating, sad but fascinating all the way down the line, and I’m reading, there is a women, an English women named Diana Norman, historical novelist. Damn she’s good. That’s alarming. She is really good. She may have scared me off of doing a historical novel I always wanted to do because she does that stuff so well. What’s the point? In the same way, I appreciate a Tolkien’s work. When I read Lord of the Rings at 19 or so and decided somewhere: Okay, not going to do anything like that ever. Very conscious decision. Okay. That’s one of a kind; I can’t do that. I haven’t been building a world for 50 years. There’s no point. And there is a recent discovery, Jason Goodwin, an English writer, has written three mysteries set in Turkey, Istanbul, in the 1830s, and his hero of all things is an eunuch. He’s the first guy to do that. He’s a very appealing hero. He knows something about people. His writing is very touching. And I’ll always re-read The Once and Future King periodically. And the old people who matter so much to me. I read a lot of nonfiction, more nonfiction than fiction probably, and history. My father was a history teacher. I read a lot of it. Lately, I’ve taken to reading more poetry. Gone back to reading poetry. I don’t read a lot of fantasy unless it’s by a friend, someone I know, something that has really caught my attention for some reason.

DD: I thought you would read more fantasy?

PSB: The best I can say in my ambitions is a wonderful scene at the end of Thirteen Clock where the Duke of Coffin Castle’s world is crumbling around him; all his sins have come home to roast, and something very like something that no one had ever seen before came trudging down the stairs and ran across the floor.  The Duke clutches his henchman and says, “Hark, What was that?” The Hark says, “I don’t know, but it is the only one that ever was.” I would like people to say that about my work. Whatever it is, it is the only one that ever was.

Bobbie Nelson has been a vagabond most of her life. During high school, she was known to be a card-carrying member of the Doctor Who Club and is suspected of trying to overthrow the world with her cat, Mrs. Kibby. After attending college, she took up her traveling shoes, and as part of a touring theatre company, she toured in the United States, Canada, and overseas. At the end of three years, she moved back to Texas to pursue a major in Library Science and became a librarian in Georgia. She currently works at the Roswell Library as a reference librarian. She has been seen many times at Dragon*Con, mostly in the company of some unusual characters, including the photography staff. She and her husband met at Dragon*Con—reports of something in the water being the cause have proven inconclusive. Currently, she is a working for the Daily Dragon. Her co-conspirator for the overthrow of the world may have changed to Fetch, the Daily Dragon's mascot. Updates will be forthcoming as the con progresses.