Considered by many to be one of the most prolific writers of science fiction, Mike Resnick‘s accomplishments include numerous awards from around the world, including the U.S.A., France, Japan, Spain, Croatia, and Poland. This year, Mike received his 31st Hugo nomination; he has won five Hugos to date. His work includes the Santiago series, the Widowmaker series, and the Starship series.

Daily Dragon (DD): Welcome to Dragon*Con. Many of your books highlight aspects found in fables and legends, such as larger-than-life characters. Which fable or legend is your favorite? 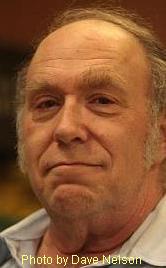 Mike Resnick (MR): There is no particular fable or legend. Ray Lafferty, who wrote a book called Space Chantey, began it with a beautiful sentence. I’ll have to paraphrase it. Something to the effect of what kind of myths or stories will they tell in the future? “Will high deeds be told in poetry, or only in computer code?” And I read that and decided that somebody should try to find out. I’ve been spending a third of my career ever since then creating myths of the future. None of these are parallels of current myths.

I like to set them on the frontier because you can do bigger-than-life characters. […] The other thing is, on a frontier you are more likely to have your two sides of whatever problem face each other directly. You’re not going to have governments interfere, you’re not going to have other things interfere, and with no historians there to correct what happened, you’re more likely to create myths. In fact, I did a novel which remains my favorite called The Outpost […] in the final part of the book, they come back to the Outpost, and they tell their versions of what happened, and you see how history gets made, not necessarily by the winners, but by the best storytellers, the guys whose story you want to hear again and again. I suppose that all ties in together in the way I do these things.

DD: What about science fiction appeals to you as a writer, editor, and fan?

MR: What I like about it is it gives you all time and space to create your moral parables. Simple as that.

DD: You also wear the executive editor hat for the online magazine, Jim Baen’s Universe. What is your goal as editor, and what was your motivation to be a part of this publication?

MR: Same goals I had as an editor for forty or fifty anthologies, which is find the best writers, and especially the best new writers, and get them into print. And please the readership. One of the things about the anthologies I did-I think I’ve done 52 already-is that two-thirds of the writers will be known writers, writers I know and that the readers know, whose names will go on the cover and sell the book. But that enables me to buy seven or eight unknowns every book.

[…] What I’m really proudest of as an editor is that I have developed eight people who got on the [John W.] Campbell [Best New Writer Award] ballot, which is our rookie of the year thing, and one of them won. It was my daughter, and she’s got good genes, but the other seven did it without those genes, and that is a real kick when you can find a fine new writer.

DD: What changes have you seen during your career?

MR: Well, I’ve been around for a long, long time, and I’ve seen a lot of changes. When I was a kid, this was a short story field. Until the 1970s, you couldn’t make a living from science fiction. When we started SFWA, the Science Fiction and Fantasy Writers of America, in 1965, in the initial meeting, we did a survey of how many of us were making $10,000 a year or more writing science fiction, and the answer was: two. […] We did another survey in the 1990s of how many were making $100,000 or more from science fiction, and there were 83. (I also think they didn’t count six literary estates.) That has been a milestone difference. Now you can stay home and really write. Another change is [Gene] Roddenberry and [George] Lucas. […] Those guys opened the universe of science fiction to over a billion people we couldn’t reach without them.

Bobbie Nelson has been a vagabond most of her life. During high school, she was known to be a card-carrying member of the Doctor Who Club and is suspected of trying to overthrow the world with her cat, Mrs. Kibby. After attending college, she took up her traveling shoes, and as part of a touring theatre company, she toured in the United States, Canada, and overseas. At the end of three years, she moved back to Texas to pursue a major in Library Science and became a librarian in Georgia. She currently works at the Roswell Library as a reference librarian. She has been seen many times at Dragon*Con, mostly in the company of some unusual characters, including the photography staff. She and her husband met at Dragon*Con—reports of something in the water being the cause have proven inconclusive. Currently, she is a working for the Daily Dragon. Her co-conspirator for the overthrow of the world may have changed to Fetch, the Daily Dragon's mascot. Updates will be forthcoming as the con progresses.