I was fortunate to meet NYT best-selling author Sherrilyn Kenyon on a Dragon*Con 2007 SF-lit panel. Fascinated by the fan adoration lavished upon her (and her splendid costuming), when next we met, I asked her for an interview for the 2008 Daily Dragon. To prepare, I read the first two novels of her popular Dark-Hunter series (Fantasy Lover and Night Pleasures). Now, like millions of others, I’m shackled to her world as a “Kenyon’s Minion,” looking forward to her next novel and her return to Atlanta for Dragon*Con 2008.

Daily Dragon (DD): Acheron, the story of the leader of the Dark-Hunters, might be seen as the capstone of the series, but with the release of One Silent Night in November, 2008, and your online description of three more major parts yet to come, it’s clear the series will continue. What heroes or heroines will we meet (or meet again) in future novels? Can you give us any hints that aren’t covered in your website? 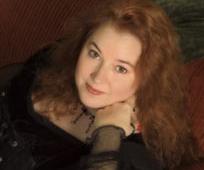 Sherrilyn Kenyon (SK): The Dark-Hunters isn’t the only series that is evolving. The Lords of Avalon series (Arthurian fantasy published by HarperCollins and Marvel) is about to have a major lynchpin book out too. In the next volume, we meet Kaziel who is a Hel Hound (those familiar with Norse mythology will have a clue in that description) and he’s out to serve Morgen le Fey’s head on a platter but first he has to claim one of the 13 sacred objects of King Arthur and battle its guardian Merlin.

Oh and there’s the manga/comic news. The next edition of Lords of Avalon from Marvel will begin this fall (after the release of the graphic novel for Sword of Darkness). The first DH manga will hit shelves next spring. But as for insights into characters for DH, all I can say is that a lot of things change in the next book One Silent Night. There’s a bomb about both Nick and Ash that will be dropped and the alliances we’ve seen are about to undertake a major transition. It’s Christmas time in New Orleans and all hell is about to break loose.

And some of the best news is that my military SF series, The League, will be brought out again sometime next year. This is my assassin series that was published in the early 1990s and it’s the only series/books that have ever gone out of print. Since the books are going for $200+ on eBay a piece, the fans have been screaming for reissues.

DD: You undertook an incredible 16-city book tour to launch your latest novel, Acheron. How did fans across the country react to the release? Did any city offer surprises in fan response?

SK: It was huge and the fans have been thunderous with their praise. Even Sue Grimshaw who is the BGI buyer called it a “Masterpiece.” I don’t know about that, but it makes me feel good because I know how tough a critic she is. We had over a thousand fans from all over the world (Japan, France, England, Scotland, Australia, China, Belgium, Germany, South Africa, Canada, and Mexico) at the launch in Nashville and then huge crowds everywhere else. The only one that really surprised me was the 300+ fans who braved Tropical Storm Fay to drive to Orlando. We had fans show up there from North GA, Alabama, Pensacola, Jacksonville, Miami, and a ton from Tampa. Oh and one from Iowa LOL. That I wasn’t expecting at all. I mean really, I come from a family who wouldn’t cross the street to meet me if I had fifty dollars I owed them, LOL. I still can’t believe that many people drove in that bad a storm just for a signing. It’s why I love my readers so much and why I appreciate them and am dedicated to them all. Because of them, Acheron flew to the top of all major lists in the U.S. and Canada and debuted at #1 on most of them. Thank you, guys. Y’all rock!

DD: Why do you think your books in particular attract male readers to a genre that has been seen as dominated by a feminine readership?

SK: I’m a woman who was raised by eight men who is currently raising three sons. My father was a drill sergeant and for years I wrote military SF under a male pseudonym. I not only understand the differences in male behavior and man-speak, but I truly love and respect them. I don’t try to make my male characters watered down or female-like. I allow them to be the great guys they are and to appreciate them and their unique take on the world.

Because of my heavy SF and fantasy background, I also write a lot of action and quips. Killing things is my forte and biting sarcasm is my trademark. My male readers seem to really appreciate those latter two things-that and the fact that I adore cars (I’m a major gear-head), guns, metal and punk music, and swords-I know that not all motorcycles are Harleys and that there are many more guns out there than a Glock and a .38. I’ve been in enough sword fights to know how they feel (armor too and I have an uncle and cousins who used to play with dynamite and other explosives) so I think I’m able to bring a realism to the characters and the battles.

DD: You have collaborated with authors Dianna Love Snell (Phantom in the Night—B.A.D.: Bureau of American Defense, Book 2) and with Alethea Kontis (The Dark-Hunter Companion). Are you working on any more collaborative efforts?

SK: The BAD Agency will continue on with Dianna as my partner. We both write so much alike that not even we can tell what parts were written by whom. We have a great combined voice. And I am talking to another writer about a different sort of venture. More details when that comes to fruition.

DD: What emerging authors do you recommend to your fans?

SK: L.A. Banks is always one of my faves. J.E. Lewis is another I adore as well as Shannon Butcher, Melissa Marr, and Kendra Clark. My staple and established authors I recommend are David Drake, Carole Nelson Douglas, Jim Butcher, Isaac Asimov, and Neil Gaiman.

DD: Your website reports that you write an incredible 20+ pages on each working day. How do you maintain such a fast writing pace?

SK: I don’t always write that on the novels. There’s a lot of admin and marketing writing that goes into the business too (as well as a lot of interviews). I’ve worked hard all my life, doing jobs many people snub. Writing is work and it’s a business and I treat it as such. I put in on average 18 hours a day. I’ve never really understood authors who finish a book and then take time off or those who only write when they’re in the mood. Nothing against them, it’s just a concept that baffles me. Probably because of the jobs I’ve worked. I’ve never met a construction worker yet (and I’m related to a bunch of them) who finished a backbreaking job and then had to take a break before they head to the next job site. You get up and jump right in. Writing’s the same way. I’m working on the business seven days a week, night and day.

DD: Do you have any advice for novice authors on how to maintain productivity and avoid writer’s block?

SK: See above. That and I can fix a bad page, but not a blank one. You have to have clay before you can sculpt. Put it down on paper and then worry about perfecting it later. Just because it’s written in blood doesn’t mean it’s carved in stone and not everything you write will be a gem. On average, I throw out 100+ pages of bunk in every book. Scenes that either don’t move the story forward, or those that are just bad or wrong turns I made with the plot. My reputation rides on every book and so I give every book my best and my all. If I finish a book and I think it sucks, I toss it out and start over. Yes, my editor has hives, but I will never put a book into production that hasn’t been given every drop of sweat and tear I can produce to make it my best. I believe my fans deserve nothing but my absolute best and so that’s what I always give them. Take pride in your work and never let anyone tell you that you don’t deserve your dreams. You do, so sit down, write that book and don’t let anyone or anything, especially those awful voices in your head, stop you. Ever.

DD: I reviewed the New York Times archives and found about ten of your books (including collaborative works and anthologies in which your stories have appeared) that have made the NYT best-seller lists. How many of your books, under either your name or your alternate pen name of Kinley MacGregor, have been recognized as a NYT best-seller?

SK: There have been 24 total titles under both names. Three of them in the last eight months have been #1 under both hardcover and paperback (four in the last year). I’ve also been at the top of the lists in Canada, UK, Japan, Australia, Germany, Norway, and France.

DD: What new costumes will you be wearing at Dragon*Con 2008? Anything not in shades of black?

SK: Until they find something darker, I will only wear black (which is one of the reasons I want to be a Sith cheerleader-that and I can embarrass my sons-I also love the dark side). Not sure about the costumes yet as I haven’t packed LOL.

Read more about Sherrilyn Kenyon, her worlds, and her books and other writing at sherrilynkenyon.com, yearofacheron.com, and dark-hunter.com. And be sure to catch Sherrilyn—and Acheron—at booths 1001 and 1002 in the Imperial Ballroom in the Marriott and at her panels this weekend.