The Miss Klingon Empire Beauty Pageant celebrated its 10th anniversary this year at Dragon*Con. Backstage, contestants snarled over last-minute costume adjustments and fought for the few available safety pins supplied by the human lackeys who scurried to obey their commands. The 2007 Miss Klingon Empire, when asked by the Daily Dragon how she felt about relinquishing her title, growled, “I’ll cut the head off the new winner, and then I’ll have two crowns and a trophy [the upstart’s head].” 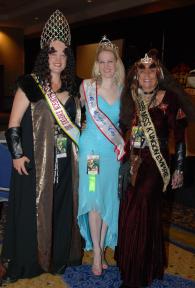 As the pageant began, Emcee Eric Watts entertained the crowd with a heartfelt rendition of “She is Klingon,” sung to the tune of Helen Reddy’s “I am Woman.” The four contestants, D’nal (Alicia Moyle), KhaZellia VanKho (Kelly Sheckler), Lady Vck (Vickey Malone Kennedy), and Nej Vestai Le’nIvnav (Sonya Desilets), strutted across the stage, each striving to shove the other contestants out of the way, particularly when Emcee Watts belted out “If she has to, she will do anything.” To the crowd’s delight, the first Miss Klingon Empire Pageant winner from 1999, Gunner Hunteer, made a brief appearance and showed her support, although she commented in typical Klingon style that since her rule, the lineup of contestants has gone sadly downhill. 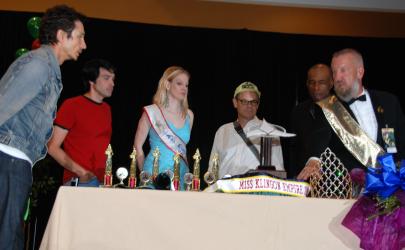 The ravishing contestants displayed their charms to an adoring crowd with talents ranging from a seductive song and dance by D’nal, who scowled at the crowd as she swung her bat’leth, to a display of artistic genius by KhaZellia VanKho, who unveiled a Klingon Mona Lisa, complete with forehead ridges and the face of Emcee Watts, painted with pigments made from the blood of her enemies. To the drumming feet of the audience, Lady Vck recited a tender Klingon love poem, vowing to marry Worf and eliminate anyone who gets in her way. At one point, she crooned, “My heart beats only for you, Worf.” An enraptured member of the crowd shouted, “Kiss her, Worf!” To the crowd’s astonished delight, Worf (Michael Dorn) charged onto the stage, swept the swooning warrior into his arms, and engaged her in a lengthy and heated bout of tongue wrestling.

Not to be outdone, Nej Vestai Le’nIvnav, garbed in the fresh-killed pelt of a grishnar cat, took the stage with a stout Klingon in tow and enacted her version of three Shakespearian vignettes, repeatedly stabbing and mutilating her companion each time he spouted his limp, overly dramatic verse. Asked a lengthy and convoluted question during the personality competition, she responded by ignoring it completely and declaring her goal to invade the Miss Romulus Pageant, forcibly occupy the Miss Betazed competition, blast straight on to dominate the Miss Vulcan contest, and finally, to invade the universe with a Coalition of the Beautiful, take the crown, and declare herself Queen of the Universe.

With the judges on stage, the contestants marched up to meet them, shoving each other out of the way in their fight to rule. When Lady Vck appeared to have achieved dominion, Nej Vestai Le’nIvnav humiliated her foe by obliterating her beneath the folds of her silver cloak. Not surprisingly, the judges declared Nej Vestai Le’nIvnav the 2008 Miss Klingon Empire. 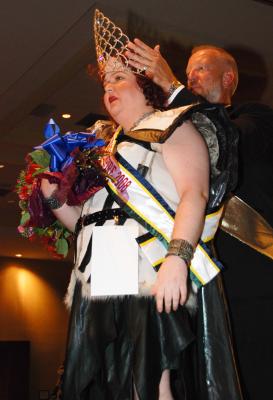