Enter a world where dragons poise with curved talons, frozen in rosewood; where brooding warriors recline among wolves; and trees sink Celtic-knotted roots into unyielding rock and weep for the moon: enter the Dragon*Con Art Show.

Artist Steve Hickman presided over this year’s Art Show Awards ceremony, dedicated to the late Dr. Patrick James Roberts.  As the ceremony began, Hickman said he had the honor and responsibility of serving on the three-panel jury for the show.  He also told the gathering of juried artists that he was surprised by the size and quality of the Dragon*Con Art Show.

Each year, attendees of the show vote on the Special Awards: their favorites in several categories from Best Spaceship or Space Scene to Best Horror.  The work of winning artists ranged from nebulae stretching out to touch dark fingers in an interpretation of Michelangelo’s The Creation of Adam to a desiccated female corpse cradling a bouquet of crimson flowers.

Hickman had the task of choosing the recipients of the Juried Awards.  While presenting the award for Best Black & White, he said, “Look at the articulation on the wing…I’m learning from this guy,” which he said was the highest compliment he could give an artist.  He lamented being unable to give first, second, and third places for each award.  “There would still have been people left over that I wanted to give awards to,” Hickman said.  When he presented the award for Best Jewelry, an intricate silver necklace with a Cthulhu clasping its stone, he joked, “You don’t want to annoy the Elder Gods.”

But the Best in Show Award he reserved for the four-foot dragon carved in rosewood.  When asked why he selected this piece for the highest honor, he said, “I’ve done a lot of sculpting.  The subtractive process is so much more difficult than drawing.”  He also said that the artists, Laura and Paul Bernier, made their own tools, and “Even their small ones [dragons] are just as spectacular.”

Come by the Grand Hall East and immerse yourself in an incredible display of talent and imagination. 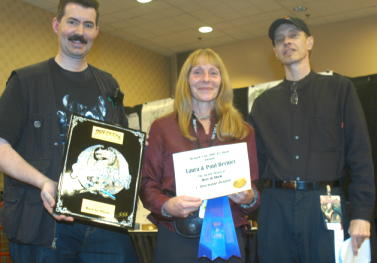