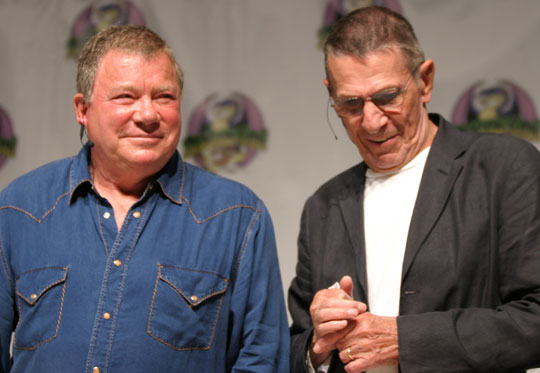 The most impressive panel to open Dragon*Con programming in years blasted off to a packed crowd Friday morning at the Hyatt.  Two icons of Science Fiction television, Leonard Nimoy and William Shatner, exuded warmth, camaraderie, and humor throughout the hour-long dialogue. Their friendship as apparent as their talent and enthusiasm combined into a remarkable “fascinating” exchange. Yes, Shatner used the line, emphasizing to Nimoy that, “Just because you used to say it, doesn’t mean you own the word.” He added, “Live Long and Prosper, I can say that, too.” To which Nimoy retorted, “You can say it, but it doesn’t mean the same thing!”

Shatner’s refrain threaded itself through the first half of the event, bringing to light the question on every audience member’s lips, “Why wasn’t I in the movie?” He, of course, was referring to the 2009 Star Trek movie directed by J.J. Abrams in which Nimoy made a strong appearance playing the parallel universe original Spock. (No spoilers.)

In response to audience questions, Nimoy discussed his character’s struggle with his diverse parentage and the encouragement it has given today’s youth. “I’m very touched by the question,” he said. Then he turned to Shatner, “I’m sure people have said things like this about you.” Shatner joked, “No one says that to me. They say, ‘Hey, fool!‘” Nimoy reiterated what most fans already know, that Kirk and Spock are good role models, emphasize education, and encourage people to become leaders who solve problems. He told Shatner, “You have every right to be proud of the character you’ve established, that [Chris Pine] carried out.” Shatner responded, “[Expletive deleted]! I haven’t seen the movie, y’all.”

In 1965 Shatner appeared in Incubus, an experimental movie filmed entirely in Esperanto. Esperanto is a created universal language pioneered by George Bernard Shaw and other linguists, which attempts to strengthen understanding between different cultures by creating words from common linguistic roots. At the time, the groundbreaking use of an A-list actor in a film that highlighted the need for international unity, not unlike Star Trek’s Federation, gave credence to the need for improved communication in a world fraught with Cold War anxiety. Shatner said of the movie, “It was a basic story of good and evil. I played the good guy.”

Later, Nimoy said, “I’m disturbed by some of the talk show hosts on the air who are inflaming the American public. … [They have made themselves] famous by saying inflammatory and dangerous things.” Nimoy emphasized, instead, the need for honest and intelligent debate. Shatner discussed upcoming fall guests on his show, Raw Nerve, Rush Limbaugh and Eric Flint, both interviewed on the same day: “Unbelievable,” Shatner said, adding that he had had the best time. He described Limbaugh as an intelligent man with one of today’s finest conservative minds, and Flint, the owner of an adult magazine and entertainment empire, as a man with a tormented and tortured soul.

The conversation wandered back to the new Star Trek movie. When confronted with the fact that he still had not seen the movie, Shatner said, “Pretend you’re me. [It’s] the realization of your wildest dream, that you’re me, and you’re getting ready to go into the theater. What are people going to say when they see you?” After a pregnant pause, he repeated, “’Why aren’t you in the movie?’ That’s why I haven’t seen the movie!”

DD Note: The panel will be rebroadcast on DCTV.