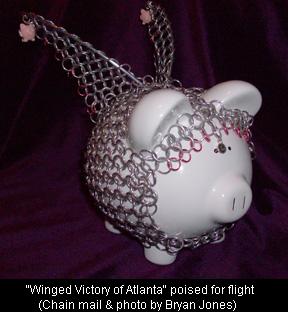 “As everyone knows, the economy has been in better shape and a penny saved is a penny earned.  In honor of this, the Charity item is going to be really cute white Piggy Banks.”

But fans also know that anything can happen where dragons take flight, fairies flutter, and cruisers sail at warp speed, just a normal day at Dragon*Con.  Wouldn’t it be wise to anchor the winged porcines before the bidding begins?  Otherwise, they may demonstrate their anti-gravity abilities:  “Porky has left the building.”

Proceeds from the sale of the airborne, but flu-less, swine will benefit the Georgia Chapter of the American Alzheimer’s Association.

The fabulous flying porkers will be exhibited in the Art Show (near its information desk to prevent unathorized take-off), Grand Hall West, and will be auctioned at the 2009 Dragon*Con Art Show Auction, Mon 12PM, Hanover C-E (Art Show Auction-Preview Mon 11:30AM, also at Hanover C-E).