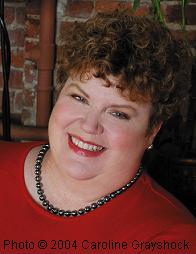 Dragon*Con 2009 welcomes Charlaine Harris, the author of the Sookie Stackhouse Southern vampire novels (from Dead Until Dark through her latest novel, Dead and Gone, a recent New York Times hardback #1 bestseller) as well as the Harper Connelly, Lily Bard, and Aurora Teagarden mysteries.  Readers beware:  the Sookie Stackhouse novels and the HBO series True Blood, based on Ms. Harris’s “Sookie-verse” books, are just as addictive as “V-juice,” the street name for vampire blood.  Continue at your own risk.

Daily Dragon (DD): Like Sookie Stackhouse, your character who is both a barmaid and friend-sometime-lover to vamps and other “supes,” you live something of a double life:  writer of exciting, sexy books and mother of at least three kids with family and community obligations.  Do these roles ever present conflicts?

Charlaine Harris (CH): I think all writers live double lives. Not many of us can live up to the drama in our books (or down to it, as the case may be), and most of us don’t want to. I feel I have the best of all possible worlds; I have thrills and chills through the books, and I have the peace and pleasant chaos of my family life.

DD: Your current home state of Arkansas is not generally known as a hotbed of liberal thinking.  Do you ever get negative feedback locally (or otherwise) due to the titillating and/or horrific content of your books?

CH: It’s been interesting. After True Blood debuted, I expected a lot of backlash . . . but that didn’t happen, for two reasons. One, some of the more sensational scenes in the series weren’t in the books. Two, people here are mostly too polite to upbraid me publicly, and they’re proud of my achievements. The local people who read my books simply dodge the Sookie novels and read the others, which are less . . . everything.

DD: You maintain an extensive website at charlaineharris.com, including FAQs and a frequently updated blog.  Although you list movie-going as a favorite activity, I did not find a specific discussion of movies on your site.  Since Dragon*Con is a multimedia convention with film-centered tracks and you’ve had  your Southern vampire books morph into an HBO series, let’s talk about movies. What is your favorite movie and why?

CH: My favorite movie of all time is The Last of the Mohicans, with Daniel Day Lewis. It’s excellently acted, has a good script, an outstanding score, and it’s gorgeous to look at. I love B and C movies, too; The Replacement Killers (Chow Yun Fat and Mira Sorvino) is one of my favorites.

DD: Did any film(s) inspire your writing?

CH: Films inspiring writing…no, that doesn’t ring any bells with me. Maybe more the absorbed fact that the hero can be seriously flawed; I watched Lawrence of Arabia at a very impressionable age.

DD: Do you think any films are must-see opportunities for fans of the Sookie Stackhouse novels or your other books?

CH: Must-see? No. But I’d recommend Buffy the Vampire Slayer (the television series), of course, and if you’re going to read my older mystery series about the librarian Aurora Teagarden—these are very traditional mysteries—maybe watching Designing Women would amplify Aurora’s world.

DD: Do you view any films as educational for would-be or beginning writers?

CH: I think writers benefit from being exposed to good writing, and there are many well-written films and TV series out there that can teach the aspiring writer a lot, especially about dialogue. Buffy, of course. Homicide was maybe the best television series ever, with fantastic writing and acting. Of course, No Country for Old Men was absolutely great from every standpoint, and I also really enjoyed both the television series Firefly and the movie Serenity.

DD: Dragon*Con also offers an array of bands each year that you might find inspiring, especially given the background music in the Sookie-verse (which mentions bands occasionally as part of its colorful bar scene, including the Shreveport vampire bar “Fangtasia”).  What types of music, songs, and performers do you prefer?

CH: I’m creepy about music. The fact is, I like bagpipe music, Irish music, and I listen to some zydeco from time to time. There’s a whole block of artists I missed in the past 20 years while I was raising my kids. The things I do like are very eclectic. I like country music, rock, and even the occasional rap song. I listen to classical music while I’m driving, if I have control of the radio.

DD: Do you ever listen to music when you write?

CH: Another creepy thing. I listen to movie music while I write. I especially like the scores of Titanic, Braveheart, and The Last of the Mohicans.

DD: Earlier this year, I was proud to see two of the Sookie Stackhouse novels in the New York Times paperback mass market bestseller top 5- and 20-lists, respectively.

CH: All the Sookie books have been on the NYT list at one point or another. Right after True Blood aired, seven of the Sookie books were in the top 15, I think. This gives me a certain amount of prestige in the publishing world, makes me a favorite at Penguin, and of course I make a lot more money. This is very sweet after all the years when I wasn’t even breaking even.

DD: I’m especially anxious to learn the backstory about Sookie’s cousin Hadley, explored in Definitely Dead.  Will your upcoming collection, A Touch of Dead (Ace, October 2009) include all of the Sookie Stackhouse short stories to date?

CH: Yes, ATOD will have all the Sookie stories; not all the ones set in the Sookieverse but featuring other characters, but the ones with Sookie as protagonist will all be included.

DD: What can you tell us about future installments of the Sookie Stackhouse continuing saga?

CH: I’m working on Sookie 10 now, titled Dead in the Family. There’ll be a new Sookie novella in the Sookie Companion, which we hope to have out next year. Then we’ll see.

DD: Your Southern vampire series represents only one aspect of your fantastic writing.  Your Harper Connelly series features a protagonist with a totally different relationship with the dead.  What plans do you have for upcoming novels in that series?

CH: A new Harper, Grave Secret, will be on the shelves early in November. I’m not sure I’ll continue the series after that. Maybe I’ll write something new.

DD: What fueled your interest in other modes of contact between not only the living, but with the dead and the undead?

CH: I’ve always been a morbid little person. I was a Poe fan very early in life!

DD: This is your debut year at to Dragon*Con.  Where can fans find you at Dragon*Con this year?

CH: Wandering around in a daze, most likely. Just look in the program. I’m very faithful about showing up on time!

Be sure to catch Charlaine Harris at “An Hour with Charlaine Harris” on Friday at 7PM, Cent. I (H); her autograph signing on Saturday at 5:30PM in M301-M304 (M); and her other appearances at Dragon*Con!