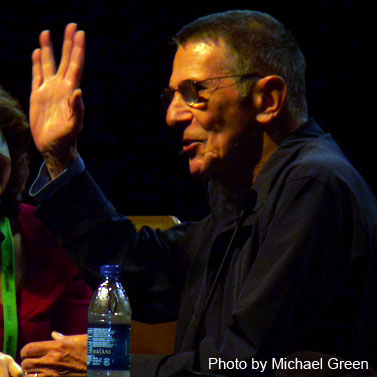 Leonard Nimoy, famous for his role as Mr. Spock in the original Star Trek series, has been wowing the crowds at Dragon*Con.  Actor, director, singer, poet, photographer—this distinguished man seems to have done it all.  And to have done it all so well.  As he waited backstage before the “Beyond Spock” panel, Nimoy graciously agreed to answer a few questions for the Daily Dragon.

Daily Dragon (DD): You have published two collections of your photographs, The Full Body Project and Shekhina.  What aspect of photography interests you most?

DD: What future projects do you have in mind?

LN: Right now I’m working on Secrets [The Secret Selves Project], which will be very interesting to the Dragon*Con people because it is about hidden or fantasy or personal lives.  I have done portraits of a number of people who come to me to be photographed as their other selves.  […]  These are people who have some other kind of personal secrets to themselves.  There will be an exhibition of this work next July in Massachusetts at the Massachusetts Museum of Contemporary Art in North Adams Massachusetts, including a video of my conversations with these people.

DD: Many people will always remember you as Mr. Spock in the original Star Trek television series.  What do you think of your widespread and lasting popularity in this role?

DD: When you began filming Star Trek, how much background information were you given about Mr. Spock, and how much of his character development, like the Vulcan nerve pinch, was your contribution?

LN: What I was given was that he had a Vulcan father and a human mother, and that he was committed to living the life of a Vulcan [and] functioned logically.  That’s essentially what we started with.

DD: You have said that in your early career, you were often cast as a heavy because you didn’t have the look of a leading man.  Do you think this kind of stereotyping has changed over the years, and if so, in what ways?

LN: No, not really.  Well, somewhat.  Leading men look a little different than they used to.  Times change.  These things are culture-driven.  I think that some people given leading roles today would not have been given leading roles 30, 40, 50 years ago.  They would have been playing characters.

DD: What do you think about how the new Star Trek film used the concepts of time travel and parallel universes to update the series?

LN: The parallel universe was very successful.  They put it in an alternate universe in order to be free to do things that might have been . . . prevented from doing if they had to be faithful to the cannon of all the original material.  So they gave themselves a clean slate by saying this is an alternate universe, and alternate time.  I think it was a very clever way of giving themselves the opportunity to be creative.

DD: In Star Trek, what was it like to face your younger self?

LN: I thought it was terrific.  Zachary Quinto is a very talented actor, a very intelligent actor.  I thought he did a terrific job.  And I feel very flattered that the character we created has a new life and will continue for some time, which I think is great.

DD: What effect do you think the Star Trek franchise has had on science fiction?

DD: When Star Trek began back in the 1960s, the science fiction genre was still basking in the afterglow of the Golden Age, with positive stories where science solved problems and the future looked bright.  In what ways do you think this has changed? We seem to have a lot of dark, apocalyptic themes now.

LN: There’s been a lot of dark, negative work done.  These things go in cycles.  The people who are producing are trying to catch the zeitgeist, to figure out what people are thinking about, what people are feeling.  I think Star Trek has always been a hopeful exploration, and I think that’s one of the reasons for its success.  People enjoy seeing this group of talented, professional people solving problems…not being overcome by the negative aspects.

DD: What do you foresee for the future of science fiction in TV and film?

LN: (Laughs)  I think I would position myself as a watcher to see what it’s going to be like.  I’m curious about where it’s going to go next.  I’m working on Fringe…  I’ve already done a couple of episodes.  One will air next month—another alternate parallel universe story.

DD: Thank you so much for your time.  We hope you’re having a great time here at Dragon*Con!