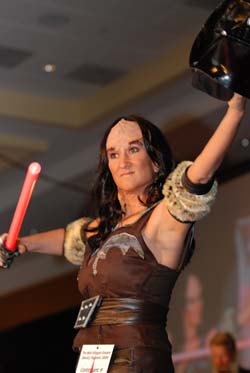 And the winner is…Warrior Ariam (Lucy Maria Boydston), of Hixson, TN.  [The Daily Dragon staff appreciates very much the subtle reminder received from Miss Klingon Empire 2008, Nej Vestai Le’nIvnav (Sonya Desilets), that the winner is really what the contest is all about.  Torture by ‘oy’naQ painstick will not be necessary.]  The Daily Dragon staff cowered behind red-shirts hired for added protection while Warrior Ariam and her fellow contestants snarled backstage at the Sheraton Grand Ballroom in preparation for this event.

Returning with rave reviews for his tap dance routine in the Centennial Ballroom on Friday morning, Eric L. Watts served as the Master of Ceremonies, introducing Miss Klingon Empire 2006, 2007, and 2008 with a heartwarming rendition of “She’s a Klingon, whoa, whoa, whoa, she’s no lady,”(sung to “She’s a Lady”).

Contenders fought bravely for the right to be crowned the titular darling of the Empire.  Dok’mikh Tor’sha-nuch (Tammy Gallant), warned that her ship was in orbit, with all 18 disruptor cannons locked on the room.  She suggested that the judges “choose wisely.”  Warrior Ariam countered with the promise that if she got the crown, she would bring back the head of Earth’s worst enemy: Hannah Montana.

Not to be outdone, Grilka QIHqem (Ilka-Maria Deason) marched to the back of the room and corrected the yearly tech-ops difficulties—by cutting off the offender’s head, which she held high to encouraging shouts of “K’apla!” from the approving audience.  Emcee Watts apologized, saying that he thought they’d gotten last year’s problem fixed.  “Well, it’s fixed now,” he added.

Major Nilan tai JomRak (Christine Evans-Arriaga) recited a rousing poem but seemed to lose her tongue as she mentioned Ensign Kim’s name.  After a whirling hug by said ensign, she left the stage somewhat mollified.

Warrior Ariam stole the show, however, when she sang the threatening yet sexy “One way or another, I’m gonna find you,” while jabbing her sword repeatedly into an invisible enemy’s heart.  This epitome of Klingon womanhood surged to victory when asked a difficult question about waking up in bed with a human, a Ferengi, and a garden gnome, surrounded by assorted accouterments that included Romulan ale and bubble wrap.

Her answer wowed the crowd.  With calm assurance, she growled, “When I was but a toddler warrior, I was asked that very question by my parents.  I will tell you now what I told them then.  I would rather caress the ears of a Ferengi as he breathes on my neck.  I would rather mind-meld with a Vulcan as he forces his logic upon me.  I would rather be on a holodeck with Data as he searches for inner humanity . . . than be dishonored by answering your question!”

Emcee Watts declared the contest an honorable competition and a fair fight, but he reminded everyone that, among Klingons, there are no runners-up.  To wild cheers of approval from the crowd, the judges declared Warrior Ariam the new Miss Klingon Empire.  In an attempt to pacify the disgruntled . . . non-winners, lovely Klingon attendants gave consolation trophies to each of the contestants, listed in order of appearance:

Any Klingons interested in entering the pageant next year or serving as security for the ever popular, but often brutal, event may contact Dragon*Con’s TrekTrak and the Miss Klingon Empire Beauty Pageant at www.trektrak.com.

And that’s a wrap.

But wait.  Breaking news.  Dok’mikh Tor’sha-nuch’s starship has been sighted where? And they’re aiming their disruptor cannons?  Oh, no!  We don’t have a shield at the Shera . . .