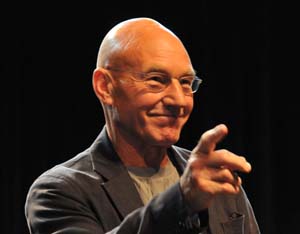 One of the classiest actors to ever work in the genre, Patrick Stewart spent an hour on a conversation-format panel on Saturday afternoon. Pleasing the crowd right from the start, he took off his cap and, with his signature gesture, Engaged the crowd.

Eric Watts sat behind a desk, orchestrating the interview Carsen-style. Stewart mentioned that he felt, “nervous and insecure,” but within moments, Watts had eased him into a comfortable chat that began with a discussion of Stewart’s leisurely trip from New York City to Atlanta on the train.

When asked how Stewart would like to be best known, the actor joked, “For not having died.” However, he then added, “I would like to think I have not yet done the work for which I might be best remembered.” He then mentioned that this year marked his fiftieth year as a working actor, from his initial role as Morgan, a pirate, in Treasure Island. Looking to the future, he added, “I have a secret list of work I want to do that will take me into my eighties. But if it ended tonight and [the time I spent as Jean-Luc Picard] was what I was remembered for, I would be very content.”

Stewart discussed two of his most acclaimed Star Trek: The Next Generation episodes: “Family” and the two-hour “Chains of Command.” Each of these two memorable episodes showcase not only the complex and contradictory nature of Jean-Luc’s character, but also Stewart’s quintessential talent.

Speaking about his former cast mates, Stewart mentioned his respect for Jonathan Frakes. One of Stewart’s fondest memories is of Frakes’s first chance to direct an episode of TNG. He said that Frakes was “confident right from the start.” Stewart felt proud to have witnessed the beginning of a wonderful directorial career.

Part of Stewart’s original contract with Paramount involved a six-year signing commitment. Stewart had hesitated, as he had other projects that he did not want to forgo. Everyone in Hollywood that he knew guaranteed that TNG could not possibly work and that it would be lucky to survive the first season. Funny how things turn out.

He spoke fondly of the new J.J. Abrams Star Trek movie,  calling it, “absolutely terrific.” But when he considered the notion of having a cameo appearance, he said, “I feel I have left behind a legacy as Jean-Luc Picard that doesn’t need adding to.”

When asked about the opportunity to work with the legendary Leonard Nimoy and William Shatner, Stewart joked, “Can you be legendary and be alive?” On the subject of Nimoy, Stewart said he was, “somewhat in awe of his presence on stage.” Stewart was impressed with Nimoy’s humor, dignity, and enthusiasm. Stewart then said, “Mr. Shatner, on the other hand.” A long paused followed, after which he added, “He’s a piece of work, isn’t he?”

Stewart also had an opportunity to speak well of his work as Dr. Xavier in the X-Men movies as well as his fond friendship and profound respect for Sir Ian McKellen, who for the past seven and a half months had shared the stage with Stewart in Sam Beckett’s Waiting for Godot.  When asked if there might be a future role for Professor X, he said, “I am told that there is,” to approving cheers from the crowd.  He added, “the good professor made a brief appearance [in X-Men Origins: Wolverine].  I hear it stopped the show, which is good.  A little bit of humility will do Hugh Jackman good—to realize he isn’t the only hunk on the planet.”

Stewart is charming and passionate about his work. In his own words, “What I do…identifies who I am. What I do defines me.”