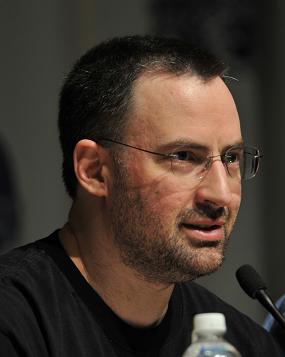 The Regency VI-VII early Sunday morning was full of attendees wanting to know more about the man behind the Dresden series and the Codex Alera series. Jim Butcher is this incredible author.

He spoke on how he got started, and how horrible his writing used to be. He stated that he finally took some classes at the local college and followed the advice of the teacher. It was hard for him at first. He felt that since he had a BA in English Literature, his degree was better than the 40 novels his teacher had published.

He finally “got a clue about two to threee years later,” he told the audience, and followed all the worksheets from that class. His “fifth book” (which was a rewrite of his first novel) became the first in the Dresden series.

The Codex Alera series was started on a bet. He was given two really bad ideas; missing Roman Legion battalion and Pokemon. If only he could remember who it was, he would show him. However, “living the good life is the best revenge.”

The way he weaved his “spell” with his wonderful storytelling and his repartee with the audience during the Q & A made this panel an early morning pleasure.