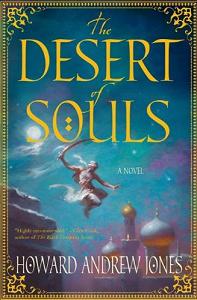 I received an advance reader’s copy of the forthcoming novel, The Desert of Souls (Thomas Dunne Books, February, 2011), by Dragon*Con guest Howard Andrew Jones for review. In addition to being a novelist, Howard Jones is also the Managing Editor of Black Gate magazine.

Soldier Asim el Abbas and scholar Dabir ibn Khalil make an unlikely buddy match-up in this thrilling novel set in an 8th century Middle East filled to the brim with legend, buried cities, blades, and wizardry leavened with just the right touch of romance. The book has an amusing, if slightly slow start, but don’t let that tempt you into setting it aside before you reach the challenge awaiting Asim and Dabir in the “desert of souls” that lies, physically and metaphorically, at the heart of the story. Howard Jones, through Asim, his heroic narrator, displays a consummate gift for storytelling that immerses you fully into the world of the Arabian nights while leaving you stunned by the frequent awesome beauty of his prose style. In spite of reading through the night, when Asim announced “this tale is done,” all I wanted to do was open the book at the beginning and read it again.

In one word? Splendid!