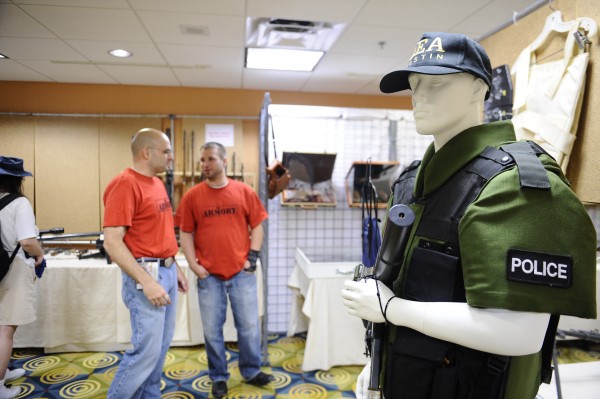 As a Canadian, I don’t know much about guns, or weapons in general. I’m more likely to notice someone’s Blackberry than to notice whether or not they’re packing. But when I read the summary on the Armory [Inman (Hyatt)] in the Special Events section of the pocket program, I decided I simply must check out the room.

Never have I witnessed so many different weapons in one place at one time. Automatic machine guns, rifles, revolvers, shotguns, crew-served belt-fed guns, grenades, claymores, RPGs, land mines, swords, knives, harpoons, bows, armor; you name it, they have one. Or several.  All of the primary U.S. military weapons of the last 100 years including: 1403 Springfield, M1 Garand, M1 Cobra, M14 (Sniper), M16A1, M4, and the M4A4.

As a matter of fact, at 4:55 PM Tuesday, August 31st Dragon*Con became a nuclear power—that was when the (replica) 10 KiloTon Nuclear Weapon was delivered to The Armory. This suitcase bomb is a replica of the one used in the film, Big Trouble with Tim Allen.

Kevin Dockery, author of many non-fiction books on weapons as well as several novels, has been planning and strategizing how to put together such a display for several years. The main purpose, he explained, was to allow writers and artists to see the weapons up close, to get a feel for the dimensions and the weight, so that they can accurately represent them in their work. 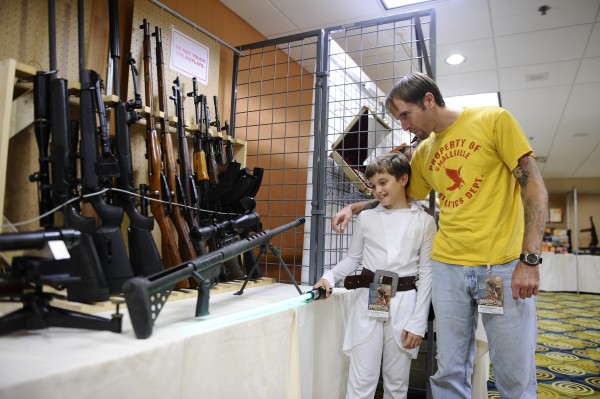 I learned so many facts about the types of weapons, suppressors (not silencers, no sir!), the methods for cooling barrels (water vs. air), the mechanics of booby traps, the set trigger (which sets the second trigger on a sniper gun to turn it into a hair trigger), Bowie knife characteristics, and even the subtle display rules for samurai swords. They even have three weapons with a Star Wars connection: the machine guns used by stormtroopers, the one the blaster was modeled after, and the Mouser that Han Solo’s weapon was fashioned after.

For the technology-sabotage-inclined they have a model of an EMP weapon on display.

I now know the difference between a Luger and a Glock, a duck bill muzzle and a black powder rifle, the subtle variances of different counties’ AK47s (the Romanian version included a pistol grip), and the difference between a rescue knife and a demolition multi-tool. Thank you to Lamar Cheatham, Kevin Dockery, Bill Fawcett, Kevin Miller, and Teresa Patterson for their patience and their generous fact-sharing.

For any weapons enthusiast, or even for con-goers like me who are simply curious, the Armory is a must-see exhibit here at Dragon*Con.