For the last several years, I have followed the new Battlestar Galactica panels for The Daily Dragon. This year, instead of reporting a sampling of the many interesting comments by ALL of the BSG actors, I decided to focus solely on the many contributions made by Edward James Olmos. Not because the other actors’ comments were any less important or entertaining, but simply because they all said so many wonderful things, and I’ve only got so much space in my article! 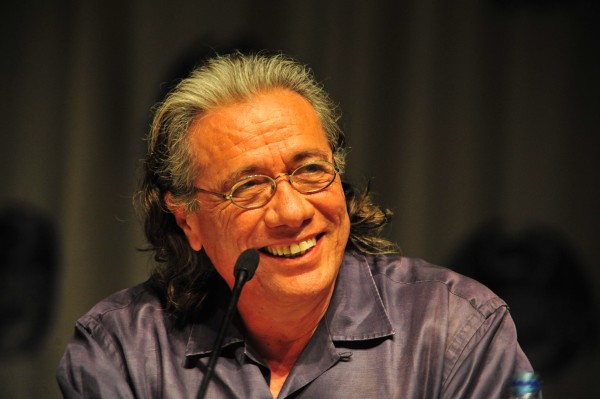 Edward James Olmos is a seasoned actor and director, who played the part of William Adama on the new Battlestar Galactica. His intelligent and heartfelt comments made this year’s BSG panels special and informative to the fans.

In 2009, several of the cast members as well as Ronald D. Moore and David Eick visited the United Nations and spoke on the topic of human rights issues. There, Olmos delivered a speech about the word “race” and how we only have one race, the human race, here on Earth. However, the word has evolved into a cultural determinant and we must move away from this incorrect usage. He even got the members in attendance to repeat “So Say We All.” In the show, the cylons and humans had to find a way to reconcile, and without that, the humans would have been wiped out. This notion of reconciliation is something the UN stands for and the BSG cast was there to reiterate that imperative.

On the topic of editing, Olmos spoke about the many scenes that never made it to the final cut of an episode, or even onto the DVDs. He pointed out, that the crew would tend to shoot 52 to 57 pages of script, even though the show would only be able to use about 41 pages of material in the final edit. Though the actors wouldn’t have had to work so hard and rush if they’d shot perhaps 44 pages of material, the process tended to elevate the show to a higher level. Many of the actors struggled with having their work discarded, especially scenes that they felt they had truly nailed. But the directors saw the bigger picture, said Olmos, and the shows were better for it.

Then he discussed the cycle of improvement per episode, a sequence that helped the show to evolve.

First the writers would write a great script.

→ Then Ron and David would add their input

→→ Then the actors and crew would shoot the script

→→→ Then editing and special effects would clarify and enhance the script

→→→→Finally, music and other final changes would produce a great episode.

By the end of these steps, the episode would be substantially improved.

But the story doesn’t end there. Viewers flocked online and they downloaded the show and blogged about the show, and the writers and producers would check out the comments. When the writers began to write the next episode, they would be starting from this new plateau, significantly higher than where the previous script came from, and the entire process would begin again. That’s one of the reasons why the show was so special.

Olmos credited his fellow actors when he stated that Battlestar Galactica was one of the best acted shows on television.

While filming the series, Olmos read The Singularity is Near by Ray Kurzweil. In the book, Kurzweil discusses how human intelligence is becoming increasingly nonbiological and trillions of times more powerful. This notion of artificial intelligence is a theme that was extensively explored in BSG, and Olmos used the book as a touchstone during the filming of the series. He advised everyone in the audience to read the book for themselves.

When asked why the show didn’t give the answers to many of the questions posed, he said, “We didn’t have the answers.”

When joking about the idea of a new series concept of where BSG could continue, Olmos said, “Imagine it’s a while later, after the end of the series. Adama is in his cabin, building his new life. Tigh shows up and says, “We’ve got a problem.” There, said Olmos, is where the new show could begin.

He also discussed how several commanding officers in the real military had written him to thank him for accurately portraying the difficulties associated with being in command. “[Adama] was an alcoholic, he was using drugs, and crying all the time.” The commander was an absolute mess, all from the stresses of the job. That notion of folding, in privacy, from all the madness, truly spoke to many real-life commanding officers facing similar stressors.

On the topic of Bladerunner, a film in which Olmos played Gaff, Olmos discussed how Moore and Eick used Bladerunner to infuse the reality of what the BSG world had become. “This show is the pre-cursor to what Bladerunner intoned,” he said. Imagine that BSG ends in the year 2008, and Bladerunner flashes us ahead to 2019, to find out that everything has happened before and it will happen again.

On a lighter note, when asked whether the cast had a new appreciation for technology after working on the show, Olmos said, “I love my toaster.”

An audience member asked Olmos about the Ray Bradbury movie that he appeared in called, The Wonderful Ice Cream Suit. Olmos spoke fondly of the movie and Mr. Bradbury, and suggested everyone seek out the film.

Finally, Olmos took the time to publicly thank Dean Stockwell for the work he did on the show, and to compliment him on his long and distinguished career. “Thank you, from all of us,” he said to Stockwell.