What is it about masks and secret identities, anyway?  According to their creator, Stan Lee, the Fantastic Four didn’t need them.  Why, you might ask?  “If I had a superpower—not to say that I don’t,” Lee told a packed house in the Atrium Ballroom of the Marriott.  “I’d say, ‘Look at me, I’m better than you.  I’ve got a superpower!’”  So he didn’t give his new heroes masks or secret identities.  Or sidekicks, for that matter.  Who wants to hang around with an angsty teenager all the time?

But Lee did give them two things that prior superheroes lacked—deep characterization and lots of dialogue.  It worked.  So he did the same for the X-Men, Spiderman, the Hulk, and more.  The rest is comics history. 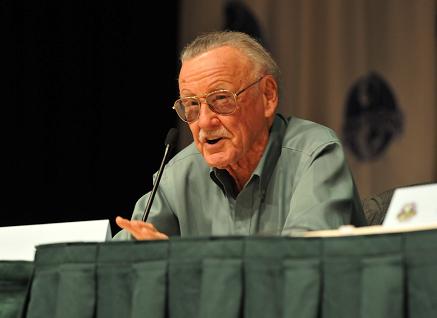 Although Lee basks unabashedly in his well-deserved fame, a bit of seriousness peeks through now and then, like when he speaks of building a vast readership, of receiving an invitation to lecture at Princeton University, and of writing about deep societal issues such as prejudice.  There’s no mistaking the earnestness in his voice when he tells the crowd, “We shouldn’t hate or dislike people who are different.  Everybody is different.”

But then he notices the big screen on his right.  “I just realized—I’m there on the screen,” he says, and the twinkle is back in his eyes.  “I’m looking at you, and I could be looking at me.”  And he tells of the star with his name on it that will soon grace the sidewalk in Hollywood.  “Excelsior!” he shouts as he rises to leave, and the crowd resounds in kind.