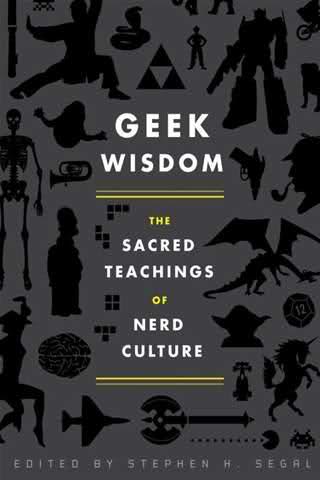 Stephen H. Segal has appeared at Dragon*Con in his role as senior editor of Weird Tales, the world’s oldest fantasy/horror/sci-fi magazine, and this year, he’s the editor and coauthor of a new book that he’s showcasing here: Geek Wisdom: The Sacred Teachings of Nerd Culture.

“It’s a sci-fi/fantasy-themed inspirational book, featuring 200 one-page philosophical musings based on the most beloved quotations from geeky films, books, tv shows, comics, etc. (“You keep using that word. I do not think it means what you think it means.” “So say we all.” “Snozzberries? Who ever heard of a snozzberry?” “I have been, and always shall be, your friend.” “Wibbly-wobbly, timey-wimey.”) There are quotations and references from all our favorite things: Lord of the Rings, Doctor Who, Battlestar Galactica, Buffy, Marvel and DC Comics, Star Wars, Star Trek, Hitchhiker’s Guide to the Galaxy, Dune, The Powerpuff Girls, ThinkGeek t-shirts…

Copies of Geek Wisdom will be available at the Missing Volume (614-615 in the Exhibitor Hall, Marriott Marquis Ballroom), and Stephen will be doing a reading from Geek Wisdom (with door prizes!) Sunday 1PM, Edgewood (Hyatt).