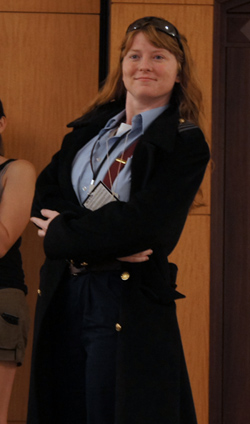 The “Doctor Who:  Davies vs. Moffat” panel in the Brit Track took place in the Hilton Crystal Ballroom at 7:00PM on Friday night. Panelists Caro MacCully, Alan Siler, and Robert Bowen began the proceedings by engaging the audience in a group performance of the Torchwood theme song while a Captain Jack cosplayeress stood up high and tried to look very serious. This set the tone for the panel.

The panelists then stated which side of the debate they fell on: show runner Russell T. Davies or show runner Steven Moffat.  Alan was firmly in Moffat’s corner; Caro and Robert were less definitive and switched sides (sometimes physically) often throughout the panel.

To start, Caro suggested they begin by talking about the differences in the way Davies and Moffat used the Doctor and his interaction with the companions, which led to a discussion of the way the two men handled relationships on the show. Alan felt that Davies emphasized the companion and her family more than Moffat, and Robert added that Moffat’s relationships were often more integral to the plot.

Robert felt that Davies tried to make the Doctor more human, but this took some of the mystery away from him. He likes Moffat’s treatment better because he introduces more alien-ness to the character. Caro felt that Davies’s Doctor was more godlike and had more power and control. But toward the end Davies showed more of an alien side of him.

Tracing the character development of the Doctor, the panel discussed the Ninth Doctor as the veteran, the Tenth as the survivor or a man in denial, and the Eleventh incarnation as finally being able to go on without the emotional baggage of the previous two. He harkens back more to the Doctors of the old series.

Davies’s and Moffat’s different styles were most often compared when talking about the character of the Doctors themselves–usually incarnations Ten and Eleven. The panel and audience cited the Tenth Doctor’s tendency to use power or force whereas Eleven more often outwits his opponents using manipulation. Style also came to play in the way both men treat the companions: During the Davies run they’re more like assistants, but Moffat treats them like pawns.

The panel turned to a discussion of the Doctor’s dark side, and the way both show runners addressed or expressed this. Though Caro feels that the Eleventh incarnation is a more innocent Doctor than Nine or Ten, many audience members disagreed.

“I think a case can be made that [The Doctor] may not be innocent in action, but innocent in the belief that he’s justified in his action,” Robert said.

“But in ‘A Good Man Goes To War’ they basically tell us that the Doctor is not the good man,” an audience member argued. “And he knows it. He has a darker side and tries to control it, but sometimes it just gets away from him.”

One audience member straight up called the Doctor a jerk, and pointed out how Davies explored that during his run. Moffat also does this, but less successfully in her opinion, especially compared to the scene in “Journey’s End” from the forth series where Davros confronts the Doctor with his own hypocrisy.

On the writing and overall plot level, the panel pointed out strengths and weaknesses in both show runners. Caro came straight out with: “Moffat pisses me off!” and found herself angrier with the plot and character choices he makes versus Davies. But Moffat’s purpose, she feels, is to shake the audience to the core.

Alan commented that Moffat is better with weaving multiple storylines whereas Davies took a more simplistic view toward story arcs. As one audience member put it, Moffat is weaving his “timey wimey masterpiece.” Caro pointed out that the reason season six was split into two parts is that Moffat felt the audience needed “an emotional break,” which is not something they needed in the middle during the Davies run. Alan was happy to hear that, in the future, there will be more standalone episodes. “I don’t need Doctor Who to be LOST.”

At the end of the panel there was no definitive answer to the central debate. Robert ended by saying: “there are no sides. It’s still one great series.”