Four years ago, Felicia Day stood handing out bookmarks at Comic-Con International, hoping that the promotion for her tiny new web series The Guild wouldn’t get lost in the shuffle of the many scraps of paper thrust at every con-goer. This Saturday, she and her Guild costars Amy Okuda and Robin Thorsen stepped onstage in the Sheraton Grand Ballroom to wild cheers from hundreds of their fans. The excitement of Nathan Fillion‘s guest appearance in the show’s current season (its fifth) had not yet worn off, and the ladies eagerly shared hints about more upcoming surprises, favorite moments of past seasons, and who could kick Day’s butt playing Halo. 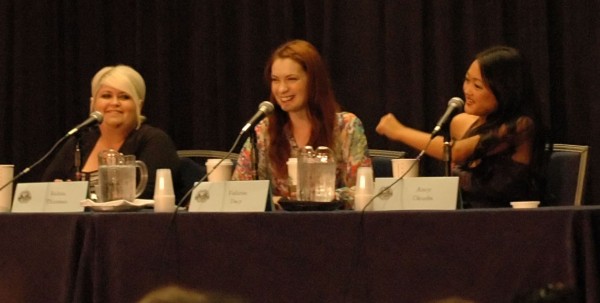 Fun, friendly, and engaged with the audience, the women acted more like familiar Dragon*Con attendees than famous guests. “We just want to be fans with other fans,” Day said. “It’s all about the people who come here.” She, Okuda, and Thorsen loved wandering the crowds with their own cameras and admiring the cosplayers–especially since The Guild‘s current season has the actresses donning full fan garb at the fictional Megagame-o-ramacon. Day revealed that she’s wanted to write a season set at a convention since the series started “because our show has been built by conventions.”

Much of the show has been crowdsourced; over 250 Twitter fans showed up to serve as extras populating Megagame-o-ramacon. An online auction for a cameo in the finale raised $3,300 for The Mr. Holland’s Opus Foundation, which supports music education for K-12 students. The actresses still seemed amazed by the effect their work has had.  “Insane,” “surreal,” and “awesome” were all words Thorsen used, and Okuda thanked an audience member for being the first person she’d seen to dress up as her character.

Day created the five-person cast to reflect the broad spectrum of people she’d met in the world of MMORPGs. “We are the oddest group of people ever!” exclaimed Okuda, and the three agreed that, just like their characters, they never would have met were it not for their guild. Day spoke to the unique power of the online community as a “faceless world,” where people connect based on their passions regardless of looks, background, capabilities, gender, or race. Though it was her gaming addiction that was the impetus for The Guild, Okuda and Thorsen have now dipped their toes in as well. “I game, but I don’t game,” Thorsen clarified. But she was quick to confirm that she had indeed beaten the seasoned Day at Halo.

So what’s the next level up for the five Knights of Good? First there’s the extra-long 12-minute episode airing in two weeks, which Day promised has “the best scenes we’ve ever done.” When asked about the Axis of Anarchy, a rival guild featuring fan-favorite guest star Wil Wheaton, Day assured us that she’s keeping those beloved characters in the back of her mind for as long as the show continues. She also wants to keep singing, following up the stunning success of “(Do You Want to Date My) Avatar” and “Game On” with more Guild music videos. And if Okuda gets her wish, Glee‘s Cory Monteith will join the cast for “copious makeout sessions” with her character. (Day’s ideal choice for a future guest star? Meryl Streep, naturally.)

Everybody groaned as the end of the panel arrived, too soon, but the dreaming didn’t stop for either the audience or the actors. Reminded of the horde outside waiting to take over the ballroom, Day responded:  “Whatever!” The audience broke into devoted applause.