The Alternate History track presented a panel featuring the stars of the Back to the Future franchise. Christopher Lloyd (Dr. Emmett Brown) and James Tolkan (Principal Strickland) fielded questions from the enthusiastic crowd. When asked what Principal Strickland would have said to them when they were in high school, Tolkan replied that for a certain period, he was a slacker. In his sophomore year, he moved to Tucson, and high school turned into everything he’d wanted it to be. Speechless, Lloyd shook his head. He admitted that he hadn’t really excelled, but fortunately, slacking at school didn’t hamper his acting career. 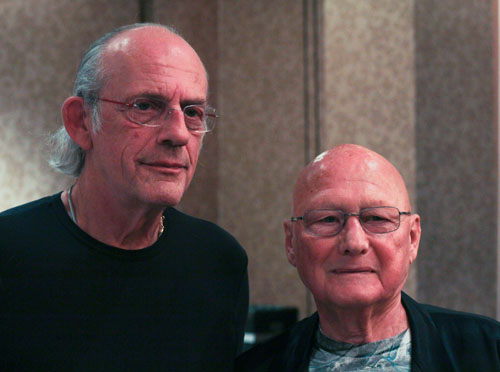 Photo by Thom Stanley
Both actors have souvenirs from the Back to the Future movies. Tolkan has a wristwatch and some delinquent slips. Lloyd kept a yellow shirt with little trains all over it, but he noted, “My dearest friend does not let me wear it.” It’s too embarrassing.

Lloyd revealed two of his inspirations for Doc Brown. One was no surprise—Albert Einstein. The other was conductor Leopold Stokowski. Lloyd possessed an album of Stokowski from the 1950s, and on the cover, the conductor stood with his arms raised, baton at the ready, before a background of the solar system; the perfect image of a character like Doc.

Christopher Lloyd discussed some of the parts he’s had during his varied career. He remembered watching a cartoon of The Adams Family when he was young, and he was eager to play the part of Uncle Fester. He said, “I’m not very fat and I don’t have a round head, but we worked it out.” The Reverend Jim from Taxi was a challenging role. Often after a hiatus, Lloyd found it difficult to return to the role. When working on Who Framed Roger Rabbit, they had to rehearse with a dummy rabbit to stand-in for his toon co-star, so when they shot the scenes he could accurately portray the motions.

The first Back to the Future movie is Tolkan’s favorite because it was so exciting. At the time, nobody knew it would be such a big hit. Lloyd prefers the third installment. He loved the horseback riding, the steam engine sequences, and of course, Doc’s love interest. “Those of you who follow my career know that there were d– few [romances].” His favorite scene to shoot was the night dance with Mary Steenbergen. They spent two nights shooting with ZZ Top on the set. Between takes, the band would play, and it was a fun time.

When asked about working with Leonard Nimoy on Star Trek: The Search for Spock, Lloyd spoke of Nimoy’s patience, intelligence, and how wonderful it was to work with the Trek cast. Lloyd would be in the makeup chair between 3 and 4 AM before a shoot. He loved the Klingon makeup, loved the costume, and loved the character. Lloyd said Commander Kruge was a joy to play. “There was nothing in his DNA about compassion or guilt. He had no conscience about blowing everybody up for his own ends.”

Tolkan and Warren Beatty were in the same acting class in New York. Later, Tolkan had the pleasure of working with Beatty on Dick Tracy. He called Beatty a fantastic director and a fabulous person. “You couldn’t be treated any better than working on that production,” Tolkan said.

Both Tolkan and Lloyd spoke of their fondness for acting in the theatre. Tolkan appreciated the weeks of rehearsal spent developing a character, a luxury there isn’t time for on a movie set. Lloyd said, “Going back to the theatre is like going home. You can’t beat a live audience.”

The best and worst part of their notoriety? According to Tolkan, the best part is “sitting here, right in this room, with you.” The worst? Auditioning and then not being hired. Lloyd smiled and said, “I can’t improve on that.”