Getting together to talk about prematurely cancelled shows is a common experience for fans of Joss Whedon, but that doesn’t dampen anyone’s enthusiasm. It was just as true at the “Welcome to the Dollhouse” panel in the Peachtree Ballroom (W) Saturday afternoon. As Eliza Dushku took the stage, she filmed the crowd cheering and clapping, which continued unabated as she was joined by Tahmoh Penikett. 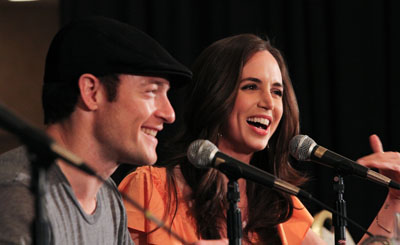 Both stars agreed that Dollhouse ended before its time. As a result, they had to rush through too much to wrap up the storylines. “In three seasons, a show can really accomplish a lot. It really deserved a third season,” Penikett said. However, Penikett noted that if the show had gone on, he would have liked for his character not to get a bullet in the head.

Dushku agreed saying she had really been looking forward to seeing how many more people could be crammed into her character’s head. She also said she would have liked to have more time with Penikett as well as Harry Lennix as Boyd and Alan Tudyk as Alpha.

Along with Whedon, Dushku was also an executive producer for the show. She said when she sat down with Whedon to discuss what kind of show she wanted to make she had so many ideas that after about four hours he just crammed it all into one show. He would remind her, whenever she looked tired, that she “asked for every single one of these characters.” Dushku also said that she was extremely proud of the show despite it having only gone for two seasons.

Asked about their favorite plot twists, Dushku noted that she both loved it and hated it when Boyd turned out to be the villain, but that, “We all know Joss. He likes to make people angry.” Penikett responded that he really enjoyed all the twists, but especially the reveal of Mellie (played by Miracle Laurie) as a doll and the conflict for his character in having to become part of the Dollhouse in order to save her.

The panel, much like the show, was over too soon. Throughout the hour, it was clear that the audience and the actors loved the show equally. As the attendees departed, Dushku and Penikett both took time to thank their fans for everything they do.

Max sees to the needs of her kitty overlords; polices the grammar on all kinds of published material including signage, menus, and food packaging; and cuddles with her wife while watching her favorite shows (Our Flag Means Death, Killjoys, Sense8, and Doctor Who among them). She continues to be far too excited to be working for the Daily Dragon.