William Shatner graced the Centennial Ballroom Friday morning at 10AM, filling the space with his charm, his sincerity, and a dash of Shatner-style.

Immediately, he walked in front of the tables and strode back and forth, stating, “I hate those desks. I want to be among you at this extraordinary event.” 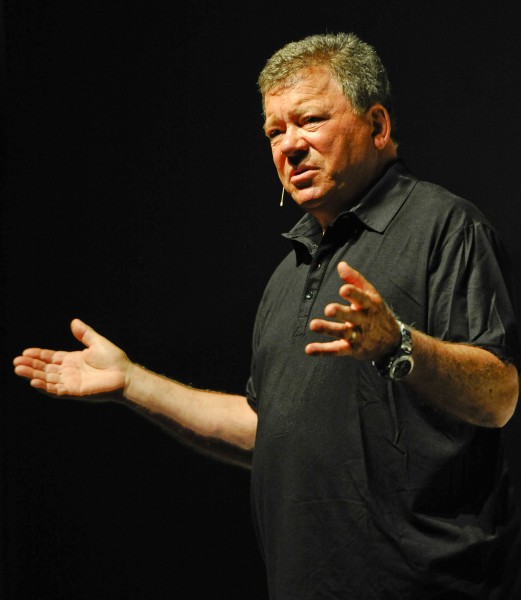 The first question from the audience reminded us of the wonderful panel in 2009 when Shatner and Leonard Nimoy bared their wonderful friendship for all of us to watch and enjoy. The question mentioned Nimoy’s retirement and wondered what Shatner’s plans might be without his former compadre.

“I’m going to celebrate!” Shatner joked. Being more serious, he recalled how previously at a panel, Nimoy had said of Shatner, “It was an honor to work with you.” Apparently, Nimoy had never said it before, and Shatner found it so beautiful it has remained with him long after.

Next he proceeded to tell the story of a prank he played on the set of Star Trek. Nimoy brought a bike to set to get to the lunch table before Shatner. According to Shatner, having lunch was the high point of his day, besides kissing girls who were all green. To counter Nimoy’s bike strategy, Shatner brought a lock. Nimoy brought wire cutters. Shatner hid the bike in his dressing room, where his Dobermans were on guard, trained to kill. The next day, Shatner hung the bike from the rafters and asked the lighting crew to put a spotlight on it. When Nimoy asked, “Where’s my bike?” Shatner replied, “Turn your eyes to the stars.”

When asked about his motivation to write a Starfleet Academy book, Shatner recalled his experiences filming Star Trek: Generations. After he performed in the scene where Captain Kirk dies, Shatner was inspired to write a book that brings Kirk back to life. The books were, “Fun to write, to imagine what we would have done in movies if the original Star Trek had been allowed to continue.”

One of Shatner’s most recent projects is the documentary, The Captains, where he interviews five captains of the Star Trek universe: Patrick Stewart, Kate Mulgrew, Avery Brooks, Scott Bakula, and Chris Pine. Shatner joked that the airfare to travel to England, New York, and Los Angeles alone cost more than the entire budget for the film. He spoke of learning interesting things about them as people, their traits, and what they might have in common.

“I’ve been acting since I was six years old,” he told the crowd. He has never received money for anything else besides some aspect of the entertainment industry. “Everything I’ve done, I’ve tried to do the best I can.”

A fan asked the quintessential question: What is your favorite role? Without a moment’s hesitation, he responded, “Captain Kirk.” The crowd went wild.