Sunday afternoon, Alice Cooper spent an hour answering questions to an exuberant and awestruck crowd at the Westin. The topics were as diverse as the man himself: performing, writing, marriage, religion, and the many other artists he has had the pleasure and honor of working with during his career.

Right from the outset, he referred to himself as, “The Moriarty to rock and roll.” He talked about how his band would walk into a room and people would take a step back. “That was our image,” he said. Rock and roll “needed a villain.” 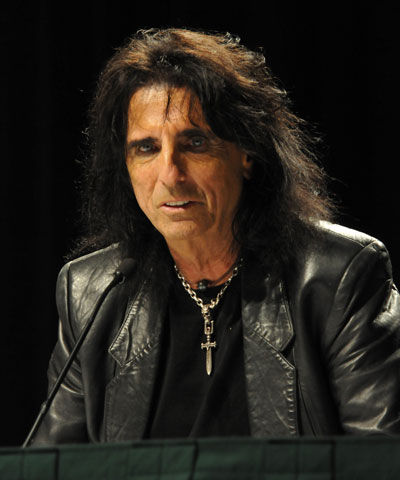 Growing up in Detroit, Cooper would often spend all day at the movies watching titles like Creature from the Black Lagoon. When he worked with Tim Burton on Dark Shadows, Cooper said one night they chatted about their influences, and they were all the same. Throughout the course of the panel, Cooper mentioned several movies that resonated with him, including Carnival of Souls (1962), Salem’s Lot (1979), and 30 Days of Night (2007).

When he was looking for the most distinctive voice in horror to work on Welcome to my Nightmare, he called Vincent Price, who responded with, “I’ll be right over.” Cooper still uses segments of the Price work in his show.

Cooper praised Johnny Depp’s guitar abilities and talked about one time that the band was playing at One Hundred Club in London, a venue that only has room for an audience of about a hundred people. That night they played cover songs that the audience members requested. At one point Cooper called up “a great blues guitarist from Kentucky by the name of Johnny D.” Up walked Depp who was soon recognized by several of the ladies in attendance. Impressed by Depp’s guitar skills, Cooper joked, “I told Johnny, ‘if this whole acting thing doesn’t work out, you can play for us anytime.’”

Asked about his album/comic book collaboration with Neil Gaiman on The Last Temptation, Cooper had many good memories about working with the author. “Neil said, ‘Let’s write the story first,’” said Cooper, “and then [I wrote] the songs.” But if Cooper had to call Gaiman, he said, “you have to call him after the sun goes down and before it comes up, because [Gaiman lives like] a vampire.”

When someone in the audience asked the Cooper how to convince someone to listen to his music that might be leery of the dark stage persona, Cooper said, “Talking about music is like dancing about architecture.” Cooper’s advice was simple, “You have to hear it. Most people who don’t know what to expect like it.”

Someone asked about his experience working on The Muppet Show. At first, he wasn’t sure about doing the show, but when he heard that Vincent Price and Christopher Lee had been guests in previous weeks, he agreed. The experience was, “The most fun I had in my life,” Cooper said. “You get so used to talking to the Muppets, they get so real, I found myself talking to a piece of felt,” forgetting to actually address his comments to the puppeteer below.

He told another story about working with Salvador Dali on a holographic piece called “First Cylindric Chromo-Hologram Portrait of Alice Cooper’s Brain.” The story Cooper recounted illustrated some of Dali’s eclectic and extravagant behavior, matching the artist’s signature works. “Dali talked like his paintings,” said Cooper, “Very surreal.” When asked later about what it was like working with Dali, Cooper responded, “I have no idea,” an accurate depiction of the bizarre experience.

When asked about the costumes at Dragon*Con, Cooper smiled and said, “I love to see the creativity. All of us have an artistic streak. [Making costumes] gives you a chance to tap into that. If you want to be someone other than yourself, then feel free. This is a place where I feel totally at home.”

By the end of the panel, I was left feeling as though I had been exposed to so many aspects of Alice Cooper: his loves, his adventures, his influences, his weaknesses, and his complicated and unique career. My thanks go out to him for being so open and honest.