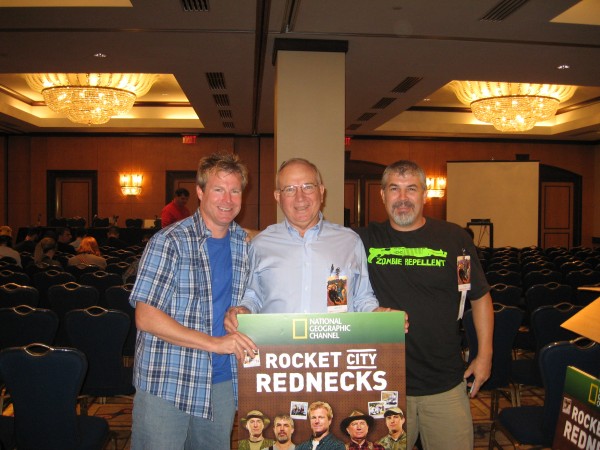 They opened their presentation with Travis Taylor telling the audience a bit about the missing members of their quintet, Dr. Pete Erbach and Michael Taylor, nephew of Travis and grandson of Charles.  Travis Taylor said Rocket City Rednecks was the National Geographic Channel’s highest rated new show last year.  To great applause, he announced the show has been filming its second season since February or March, with two episodes yet to film.

Travis Taylor said, “A lot of people think science is done with a PowerPoint.  You have to get out there, get your hands dirty, and blow something up so you know it’ll work when you rebuild it.”  He recalled seeing smoke plumes from tests for the space shuttle’s main engines and solid rocket boosters when he was growing up.

Charles Taylor worked on the Saturn V rocket under Werner von Braun.  The panel debunked the idea that American rockets were all built by von Braun’s German engineers, who numbered no more than one hundred.  Travis Taylor noted that “the Saturn V has two million moving parts.  A hundred guys can’t build that.”  He told the audience his father’s days had included plowing in the morning, working on the moon rocket during the day, and then, sometimes, harvesting watermelons after work.  “You’d have to shift gears pretty quick,” Charles Taylor admitted, to follow that routine.

Travis Taylor said, “It’s a shame we’ve outsourced our space program to the Russians,” adding that this is a particularly sore spot with his father.  Travis Taylor recalled the days when astronauts had “rock star status,” and expressed the hope those days might return.  “If you believe you can stay with it and change the world, you will.” He added that he never thought he would be on television.

The panelists then showed an episode from the upcoming season.  In this video, the five men attempt to build a 20-foot rocket intended to travel a mile after being launched from a pickup truck.  As fans of the show will expect, there are several hilarious mishaps.

The upcoming season will also feature Jay Leno as a guest when the guys attempt to build Leno a car.  Charles Taylor described working with Leno as “a big step up, I’m telling you.”

One questioner asked how Charles Taylor’s neighbors have reacted to his building rockets in his garage.  He replied that they started with curiosity, progressed to anger and then sympathy.  Travis Taylor interjected that there has “yet to be any restraining order.”

The panelists agreed that generating interest in science in young people is critical for our country’s future. Charles Taylor pulled out a pocket calculator and reminded the audience such things were unavailable when he was helping to build the Saturn V.  “We sent a man to the moon before we could carry a pocket calculator,” he said, adding that the K-6 school classes he and his costars visit don’t have that frame of reference.

Charles Taylor was 21 years old when he walked into the Saturn V for the first time.  Referring to the late Neil Armstrong, he noted “the intestinal fortitude it took to get on that and ride it to the moon.”

Travis Taylor explained that the show Rocket City Rednecks was inspired by his experiences as a consultant on an episode of The Universe about space warfare.  He said the show was interesting but “only geeks would watch it,” but it led him to think there should be a show that featured engineering in a fun, exciting way that would “educate people while they were being entertained.”

In response to a question about the episode in which the team built a tornado shelter, Travis Taylor said it was inspired by an F5 tornado that cut a swath half a mile wide by 132 miles long across Alabama.  More than 200 tornadoes hit Alabama that day, destroying more than 600 houses.  Power was out for two weeks.  The show’s stars saw a need for tornado shelters people could build themselves, or have built at a reasonable cost.  They built their demonstration model for less than $2,000.

The audience included Mary Ann Taylor, mother to Travis and wife to Charles, who is known as “Mama” on the program.  Afterward, she described her first Dragon*Con as “awesome, from what I’ve seen so far.”  A writer herself, she was “amazed to see how science fiction readers honor their authors.”

During the panel, her son mentioned that she was having the kitchen redone because the guys needed a microwave for one episode and she had a new one sitting on the kitchen floor.  Details were not provided.

Rocket City Rednecks is expected to return in November, after the elections.