Browncoat pride abounded at the “Mighty Fine Shindig” Saturday 10PM at the Westin. Many of the attendees were dressed as their favorite Firefly characters, but the Jayne hats and Kaylee parasols dominated the crowd. Others showed up as Inara, Mal, and Zoe, and this reporter even spotted someone who could have been a Reaver victim.

Irish and Scottish folk singer Marc Gunn opened the party with a number of ‘Verse appropriate songs played on the autoharp, including a number of top Firefly drinking songs. One of the most popular was “Hero of Canton, the Ballad of Jayne Cobb” (from the seventh Firefly episode, “Jaynestown”); all the attendees sang along. Everyone in the crowd wearing a Jayne hat bounded to the front of the room and danced in front of Gunn. The crowd went wild. 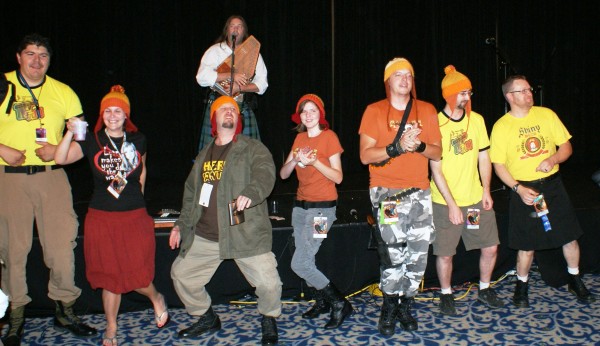 After Gunn, the band Pandora Celtica took the stage and continued to rock the room with music apropos of the Firefly ‘Verse.

During breaks in the music, the MC conducted a costume contest. Each round, he asked everyone dressed as a certain character to come to the stage and had the audience express their approval for the best example of each character. The winners were awarded customized Firefly memorabilia.

Inara de Luna is a writer, editor, desktop publisher, and SF/F fan. She has been published in a variety of genres and venues and has edited dozens of books, articles, and essays. She is currently a monthly contributor to LGBTRelationshipNetwork.org. Inara is also a Relationship Coach and Sexuality Educator who works with people around the country via phone and video. As a Sex, Gender,  & Relationship Diversity Specialist, Inara specializes in offering her services to those who identify as poly, queer, trans, and/or kinky. Inara can be found online at The Sex Positive Coach (https://www.sex-positive-coach), on Facebook at https://www.facebook.com/inaradeluna and on Twitter as @inaradeluna. And yes, her chosen name was inspired by the beautiful courtesan on Firefly.  :)