Saturday afternoon attracted another capacity crowd to the Atrium Ballroom (M) for John Barrowman’s solo panel, “John Barrowman Live!” The mood in the room was playful as Barrowman teased the crowd and they responded in kind. After taking a video of the audience so he could send it to his mom, he jumped right in to answer audience questions. Barrowman happily told stories whenever they occurred to him, including one funny story involving his partner Scott Gill and a kilt, and another about an accident Barrowman had onstage at Opryland USA.  Questions ranged from his Torchwood character to Desperate Housewives, his stage performances, and the books he’s written with his sister. 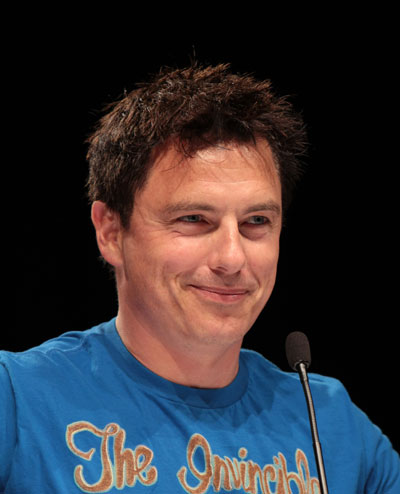 When asked if he had a preference between the stage and the screen, he said, “I never say which I prefer because the day that I say that’s when people will start pigeonholing me into one or the other. The one thing that I value about my career is that it’s diverse, and it’s you guys that allow me to do all these different things.”

Barrowman repeatedly said that he was as much of a geek and a fanboy as the rest of us. In a couple weeks, Barrowman will be doing a tribute to Gene Kelly on BBC Radio Two. He had the chance to meet Kelly a couple months before he passed away, and Barrowman spent much of that time having a fanboy fangasm. As a child, he used to watch Kelly’s movies and the MGM movies with his Gran. Kelly was particularly important to Barrowman because he liked to sing and dance. Barrowman realized at a young age that his sexuality was different from others he knew, so he looked for someone to emulate. To him, Kelly was one of the most masculine of those men. Barrowman also sang “Our Love is Here to Stay,” to the crowd’s great delight.

In Putting It Together, Barrowman had the chance to work with Carol Burnett, someone he was a huge fan of and grew up watching on The Carol Burnett Show. They got on together very well, and Barrowman called himself part of her little team onstage. Burnett said to him that she had not had so much fun working since doing The Carol Burnett Show. During one of their performances, Burnett’s skirt kept slipping until she stopped the show and let it fall all the way off. John’s reaction was to start jumping around, laughing and screaming and forgetting that he was on the Broadway stage. “I’m laughing because it was one of those priceless Carol Burnett moments that have just physically happened to me live onstage, and it’s being recorded.” The clip is available as an extra on the DVD of Putting It Together.

During the same performance, Barrowman had split his pants when he picked up his dancing partner, Ruthie Henshall. He taped them up with duct tape and went on with the show.

Later on, a fan asked Barrowman about whether he might consider doing voiceover work. He has done work for Marvel’s Super Hero Squad. The day he recorded it, he got to meet Stan Lee and had another fanboy moment. In the half-hour episode, Barrowman played a bad guy. He also said that he would love to do anime or some type of animation.

One question was about whether we would see Captain Jack Harkness in the seventh season of Doctor Who. Barrowman said that he had no idea, but if it were to happen, he would jump at it. “I love Doctor Who. I love Captain Jack. I’m a huge fan. I would love to do that, but it’s not in my control.”

One of the best moments was Barrowman’s response to a question about which monsters in Doctor Who scared him. He has childhood memories of hiding behind the couch with his brother while watching the show. The Cybermen, the Autotons, and of course the Daleks all scared him terribly. But it was while filming “The Stolen Earth” and “Journey’s End” that he came up against what terrified him most. In the scene where Davros is revealed, Barrowman was on set and standing with Elisabeth Sladen. As Davros rolled out, Sladen grabbed his hand and whispered, “He scares me so much.” Barrowman’s eyes got big and he turned to her, replying, “He scares me, too.”

In Barrowman’s home in Cardiff, he has the full-size Dalek that shot his character in the first series episode of Doctor Who, “The Parting of the Ways.” The Dalek welcomes visitors to the home of Barrowman and says three or four other phrases, all of which were recorded by the voice of the Daleks, Nicholas Briggs.

After having teased about a surprise earlier in the panel, Barrowman brought Gill out to join him onstage. Gill was asked how they make time for each other, and he replied that they just like to have drinks, hang out together, and relax. Barrowman is admittedly a workaholic, and his assistant gives Gill a schedule during the week so they can arrange to spend their nights off together. Barrowman said that over the last couple of years he has made it a firm commitment to try to keep his weekends free. Gill has been sitting at Barrowman’s table in the Walk of Fame to help him out and has been getting to meet all of the fans as well, which is a new experience for Gill.

The experience could be summed up best by Barrowman himself saying how honored and chuffed he is when people tell him he’s been an inspiration to them or helped them to have the courage to come out to their parents or families. One young woman this weekend came out to him during their photo op. Barrowman was the first one she’d told. “I was so honored at that. Those moments, I totally get it, and I totally appreciate it because I have had those moments myself.”