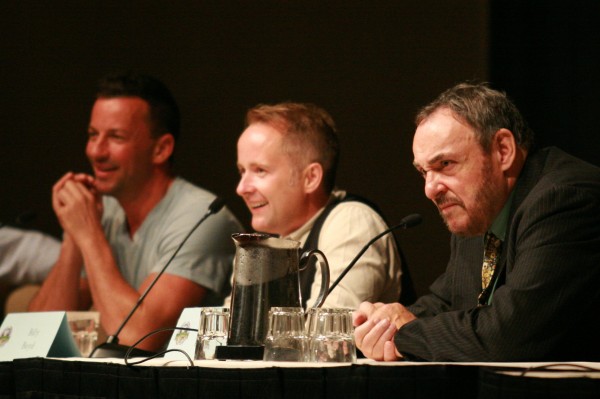 Versatile actors Billy Boyd, Craig Parker, and John Rhys-Davies captivated the audience with their enchanting accents and witty repartee.  The panel began with each actor revealing something interesting about his past work.  Boyd, who used to work as a book binder and never read The Lord of the Rings until after he had been hired for the part of Peregrine Took, joked that Tolkein’s epic work was “a book about Pippin.”  Parker was chosen to do some voice-over work on The Lord of the Rings because he “worked cheap.”  Not to be undone, Rhys-Davies revealed somewhat sheepishly that not only was he the voice behind Man Ray on Spongebob Squarepants but he also played Leonardo DaVinci on Star Trek: Voyager, a role that inspired his eldest son to say “at last you’ve done something really worthwhile.”

Reminiscing about filming The Lord of the Rings, Boyd’s favorite part was the people—not just the cast, but the entire crew—and being in some of the most beautiful places on earth, places where no one else had ever been.  Parker spoke of being with a crew of such amazing and passionate people who were so excited about bringing Middle Earth to life—and meeting Boyd.  Rhys-Davies spoke about being unable to enjoy the cast and crew because he was too busy dealing with all the makeup he had to wear.  Being Gimli, he said, was a lonely business.

The talk then turned to the best acting advice the three had received.  Boyd said, “Listen.”  It’s important to listen to the other actors, something that’s surprisingly easy to forget.  Rhys-Davies recounted a time at his first theater job when he was anxious to please and was told, “Less.”  Apparently, he had been trying a bit too hard.  He explained that modulation of power is important, knowing when to focus and concentrate that power, and he gave ample demonstration with his famously deep and resonant voice.  Parker, in keeping with the L-word theme, grinned and said “Libation.”  Then he agreed that sometimes less is more.

For those interested in what it takes to be a Hobbit, The Lord of the Rings veterans suggested eating a lot, taking the time for second breakfast, and having big, smelly feet.  All three actors were witty, affable, and seemed to be truly enjoying themselves.  At an audience member’s request, Rhys-Davies shouted out in his perfect Gimli voice, “You have my axe!”  The crowd most definitely approved.

The actors spoke of their respect for Tolkien’s work and of the extraordinary ability of Peter Jackson to interpret the rich, dense text for film.  Rhys-Davies pointed out that converting the book to a film required compromise, and he treated the crowd to an example of Treebeard’s glacial speech, explaining that he had to speak slowly, yet not too slowly that he put everyone to sleep.  Boyd said, “It was our job as actors to make our little piece as right as we [could] get it.”  The audience cheered in gratitude for a job well done.

Debbie Yutko lives near Atlanta with her husband, two children, and two cats. When she isn’t gardening, rescuing homeless kittens, or cramming math formulas into teenagers’ brains, she can be found stringing words together at her computer and dreaming of adventures in far-off lands. She is a lifelong reader of Science Fiction and Fantasy and a veteran attendee of Dragon Con, where she enjoys attending panels and working with the talented staff of the Daily Dragon.