The crowd got to their feet as Gillian Anderson came out to start her panel in the Marriott Atrium ballroom Sunday afternoon. She started off the panel by assuring everyone she was not drunk during her panel on Saturday. That’s just how she is, she said.

For the first half hour, Anderson answered questions from the moderator before taking questions from the audience. The conversation focused predominantly on the projects she currently has out or that will be out soon, including three movies, Shadow Dancer, Mr. Morgan’s Last Love, and Sister (L’enfant d’en haut). 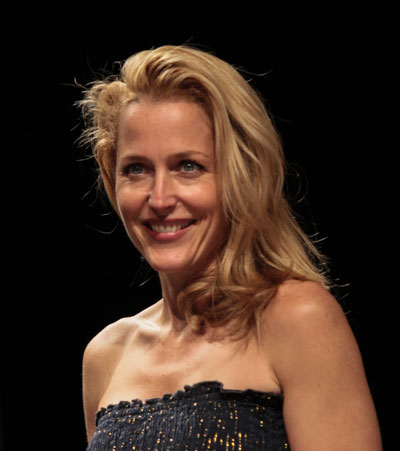 Anderson will also be seen on BBC this February in The Fall. She is playing a British Detective Superintendent, Stella Gibson, who is sent to Belfast to review an unsolved case. Anderson described the five-episode series as intense, since the audience will witness a serial killer committing his crimes while law enforcement is hunting him down. Anderson also said that the studio is trying to sell it for distribution in the States for simultaneous airing.

One of the first questions from the audience was about the possibility of a third X-Files movie. Anderson said that Chris Carter has been working on a script, but until it is complete, there is no knowing whether it will be produced.

Though Anderson couldn’t remember what went into preparing for her role as Agent Dana Scully on the X-Files, she did say that she recently completed a public service announcement for the FBI to encourage women to become agents. When X-Files was on the air, there was an influx of women into the FBI. Thirty years ago this year, the first woman attained special agent status.

The best way to sum up the panel is with the advice Anderson said she would give her younger self if she could: Appreciate what is in front of you, and don’t spend too much time in yearning and disappointment and regret. They are wastes of emotion.

The audience certainly appreciated what was right in front of them, satisfied with Anderson’s thoughtful answers throughout the panel.